Home / Reviews / A Belated Review of No Man’s Sky 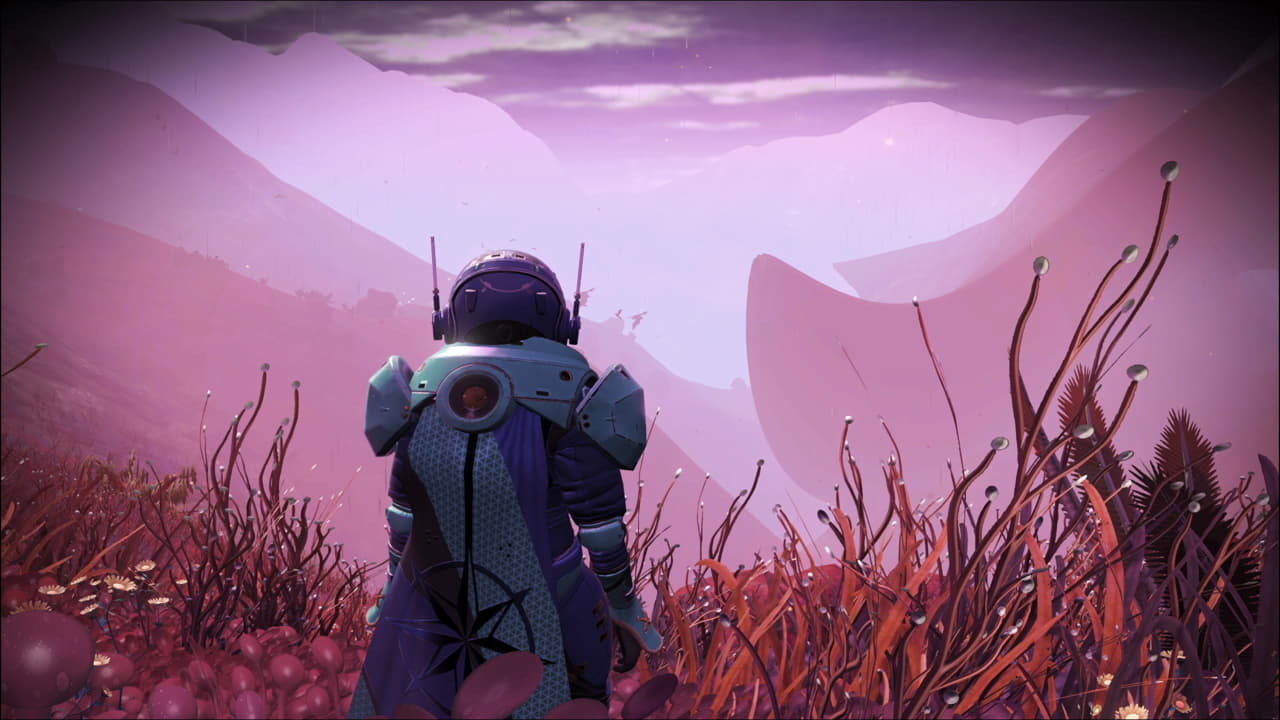 No Man’s Sky got off to a pretty rocky start when it first launched on PS4 in 2016. The game was over-hyped and over-promised and Hello Games chief Sean Murray bore the responsibility for making promises and over-exaggerating the game in some respects. When it first launched No Man’s Sky wasn’t really the game Sean Murray had made it out to be but the foundation was there.

In the years since its launch, Hello Games has built upon that foundation to create one, if not the best space exploration adventure game ever to grace PlayStation consoles.

My first foray into the universe of No Man’s Sky was on the day of its launch, I only played it for a couple of weeks before putting it down until 2018. By this time Hello Games had already improved the game drastically and added tons and tons of additional content and features.

I ended up getting the Platinum Trophy then I put the game back down until 2022. By that time Hello Games had improved No Man’s Sky even more and had added even more stuff to the game. Needless to say, I got hooked on the game again and sunk quite a few hours into it last year.

One of the things I like most about No Man’s Sky is the near-limitless exploration possibilities. There are billions of planets and 256 galaxies to explore. And although it can be said that a lot of planets are very similar, which they are, exploring in No Man’s Sky is just so much fun.

Even on barren-looking planets there still can be things to find. Alien monuments, buildings and wied alien rocks you can scan for money. Repetitiveness is inevitable in No Man’s Sky though, I don’t know how many planets I have visited, even in different galaxies where I have seen similar-looking creatures and indistinguishable-looking flora. It must be the way the procedural; generation algorithm works or something. Nonetheless, even with the seeming lack of variety in planets they still look absolutely stunning and they still look and feel new and unexplored.

Although exploration is the main part of No Man’s Sky the game has a lot of other mechanics that keep things interesting. Combat usually plays a role in your exploration of the No Man’s Sky galaxies and you will often have to fight off attacking Sentinels or battle against Pirates out to steal the contents of your ship’s cargo hold.

On-foot combat at first can seem like a bit of a mess but it’s only when you start upgrading and adding better weaponry to your multi-tool does the combat really shine. I used to avoid combat at all costs but since upgrading and installing the Pulse Spitter weapon, which is essentially a fast-firing auto rifle, combat has become a lot easier and a lot more enjoyable.

Space combat against other ships is also the same. At first, it seems very difficult but once you start upgrading your ship’s weaponry and technology it becomes a hell of a lot easier and far more fun. As with on-foot combat I always used to shy away from space combat but now I am ready and eager to go out into the dark and kick some pirate ass.

Base Building is another big part of No Man’s Sky, it was released as part of the Foundation update and some people say that Base Building saved No Man’s Sky. As well as being able to build bases on planet surfaces you can also build bases on your freighter. I have only really dabbled in some base building, I certainly haven’t created anything close to the complex structures that some fans have created.

But I do see the appeal of building, essentially a home or maybe a few holiday homes if you go between multiple planets. No Man’s Sky’s base building provides plenty of tools, options and structures to get you started in building your very own base. And one of the best things about base building is that it is not an overly complicated or difficult-to-master process. There’s even a creative mode that gives you unlimited resources to build the base of your dreams without having to worry about mining materials.

No Man’s Sky has certainly come a long way since its initial launch. The game has been vastly improved and is now in a very healthy state. It is my go-to live-service game in between the single-player games. One notable thing I should mention as well is, even though No man’s Sky is an ongoing game, Hello Games has never added any microtransactions or paid expansions. And that is highly commendable.

Although if they did start to charge a reasonable amount for expansions I and thousands of other players would not mind in the slightest.

In my opinion, No Man’s Sky is at the pinnacle of sandbox exploration games and it looks like Hello Games probably isn’t quite ready to hang up their Rocket Boots just yet. The game will be getting a free update for PS VR2 and it has already gotten a free PS5 upgrade as well. I hope Hello Games continue to add to No Man’s Sky even far into the future because as far as space exploration games on console are concerned, nothing comes close to No Man’s Sky.

No Man's Sky - The PSF Verdict

No Man's Sky has come a long way since its initial launch in 2016. Hello Games have to be praised for how they have managed to revitalise and rejuvenate No Man's Sky into the best sandbox space exploration game available today. No Man's Sky has a wide variety of content, whether you want to be a space pirate, an explorer or an architect building awesome bases, No Man's Sky has it all and then some more.