Assassin’s Creed Mirage has been revealed at the latest Ubisoft Forward. The latest game in the Assassin’s Creed series will be set in ninth-century Baghdad and will be coming to PS4 and PS5 sometime in 2023.

A Ubisoft news article about the game states that Mirage will be a shorter more narrative-driven game, that will by all accounts take Assassin’s Creed back to its roots as a stealth game. I am not entirely sure how I feel about the next game not being a huge, open-world RPG. I got into the Assassin’s Creed games from Origins and although I have since played older AC games, I definitely prefer the open-world RPGs like Origins, Odyssey and Valhalla.

Basim Will Be the Main Protagonist in Assassin’s Creed Mirage

Mirage will take place 20 years before the events of Assassin’s Creed Valhalla. If you’ve played Valhalla, you’ll meet a familiar face in Mirage – Basim. Basim is 20 years younger and is struggling with nightmarish visions and is living life as a street thief. But Basim can leave his pickpocketing days behind him when he is discovered by The Hidden Ones. The Hidden Ones see a lot of potential in Basim and help him escape Baghdad to the Hidden Ones’ fortress in Alamut. There Basim will learn the ways of THe Hidden Ones and hone his abilities.

Mirage brings the Assassin’s Creed Series Back to its Roots

Basim will have to jump across rooftops, scale tall towers and flee guards. Traversal across this urban landscape will be via parkouring across the four districts of Bagdhad. Like the previous games, Basim will also have an eagle companion called Enkidu. Your eagle friend can be called to scope out areas and tag enemies for swift assassination. There will also be a network of Hidden Ones’ bureaus across the city where Basim can get contracts and upgrades.

Assassin’s Creed Mirage is expected to launch sometime next year and will be coming to PS5 and PS4. Ubisoft will no doubt have many more updates to provide on the latest Assassin’s Creed game in the coming months. 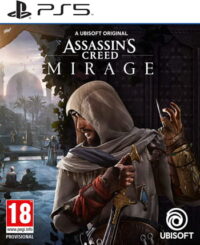