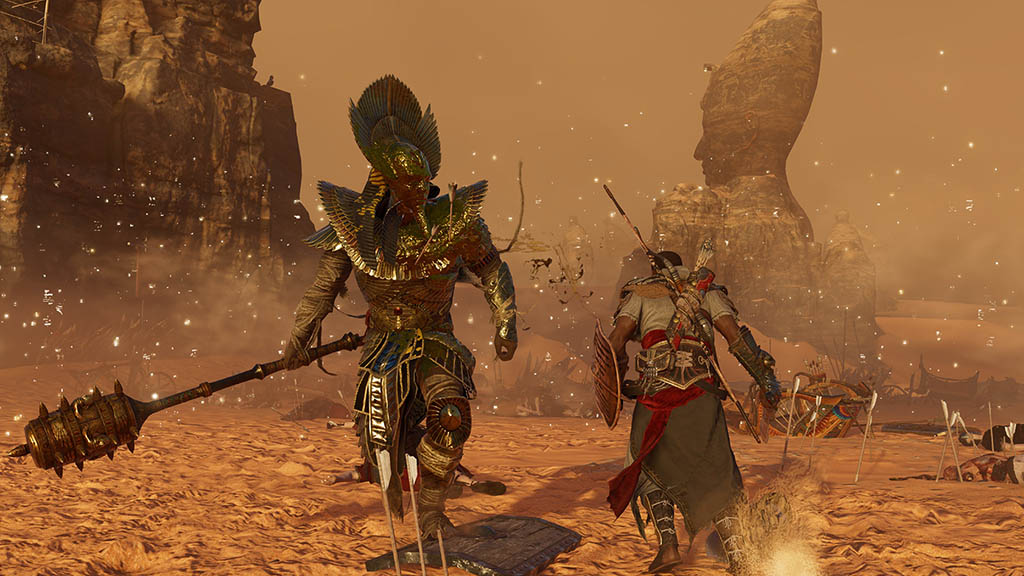 Curse of the Pharaohs takes place four years after the events of Origins, it sees Bayek travel to the ancient city of Thebes in search of an artefact. Upon arriving in Thebes Bayek discovers that the city and the surrounding regions have been struck by a plague.

Turns out that there has been a lot of grave robbing going on, with Pharaoh’s tombs being emptied of their treasures. The Pharaohs aren’t too pleased by the robbing of their tombs and have ventured out into the land of the living in the form of apparitions called Pharaohs Shadows, to reak havoc on the living. 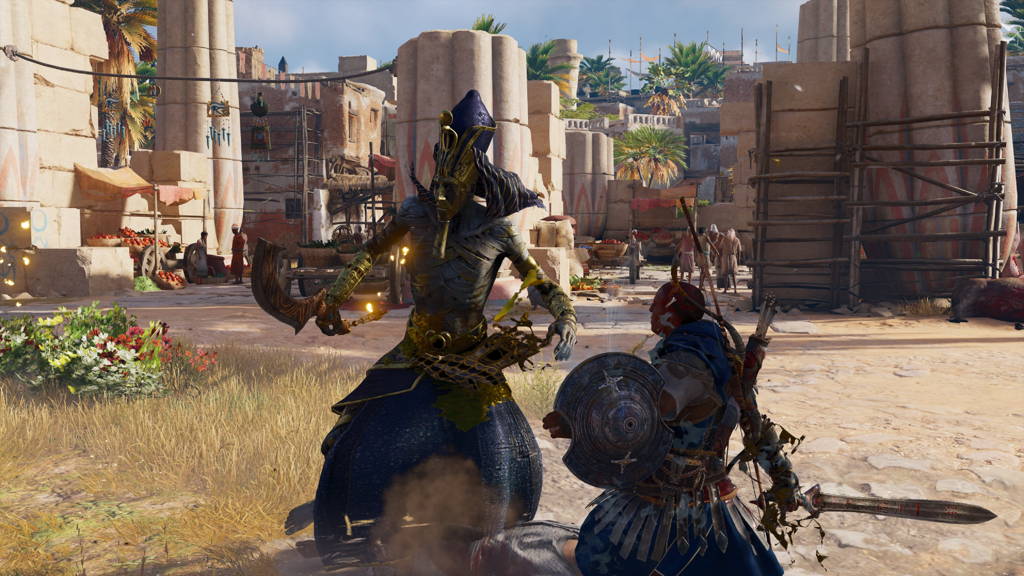 The game puts you right in the heart of the action from the offset with Bayek having to fight one of the undead pharaohs only a mere few seconds after arriving in Thebes.

The main campaign and quests where very enjoyable, Ubisoft certainly knows how to write a great story. The story tells the tale of revenge and delves deep in to Egyptian mythology with various quests and missions touching upon the Egyptian gods, religion and beliefs.

The new world map is pretty large, especially for a DLC. The new map is seperated in to six different areas; Valley of the Kings, where all the tombs are located, Theban Necropolis, Thebes, the ancient capital of Egypt,  Thebes Nome, Waset Desert and Yebu Nome. 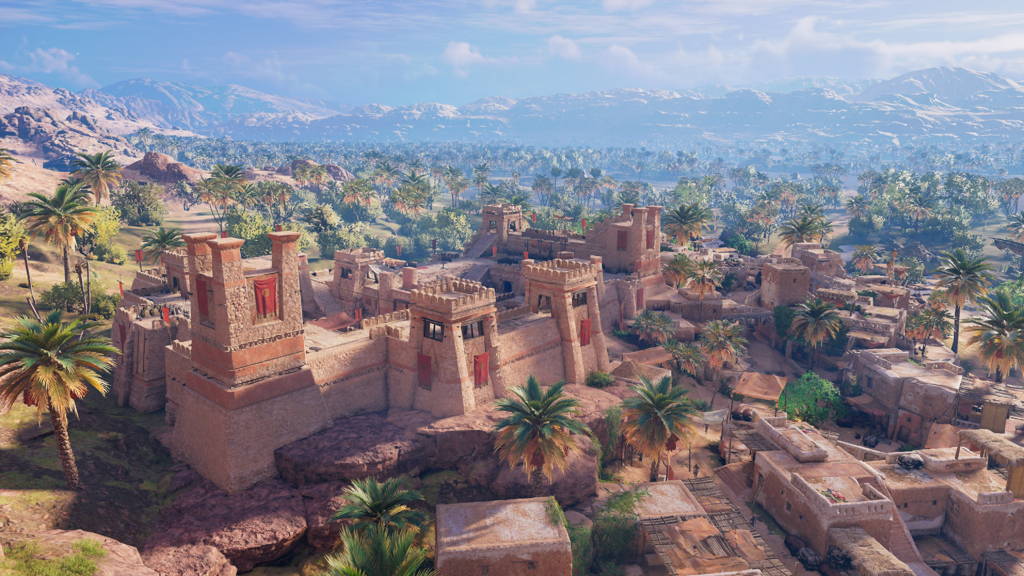 The locations on the earthly regions of the map look pretty much similar to what we’ve seen in the areas of Egypt from the main game but they are equally as stunning looking. There is some amazingly recreated temple structures to ogle at as well, like the Temple of Karnak in northern Thebes.

As with the main game and The Hidden Ones DLC, each area is bustling with life, with people going about their business, soldiers patrolling and animals grazing, it really does make the world seem alive.

Gameplay is not limited to the six areas I’ve mentioned above though. As Bayek progresses through the story and the quests, he will eventually have to visit each of the undead Pharaohs afterlife regions. There are four regions which act as completely seperate, self-contained worlds and each four are uniquely different and amazingly designed.

Aaru (pictured above) is a stunning looking locale, with golden fields of wheat stretching as far as the eye can see, massive Nefertiti statues dotted around the landscape and an amazing looking temple.

Not a great deal has changed on the gameplay side of things, but that’s find as exploration and combat was already as good as could be. The level cap has increased from 45 to 55 so the enemies are much tougher and you will have to reach the level cap to succesfully take on the toughest of enemies in Curse of the Pharaohs.

New crafting levels have also been added to Bayek’s gear and a new crafting material – Shards of a Star has been introduced, making for a wothwhile grind in between quests.

The Pharaohs Shadows are also very tough, these enemies randomly appear throguhout the living world and you only have a limited time window to track them down and send them back to the afterlife, albeit temporarily. 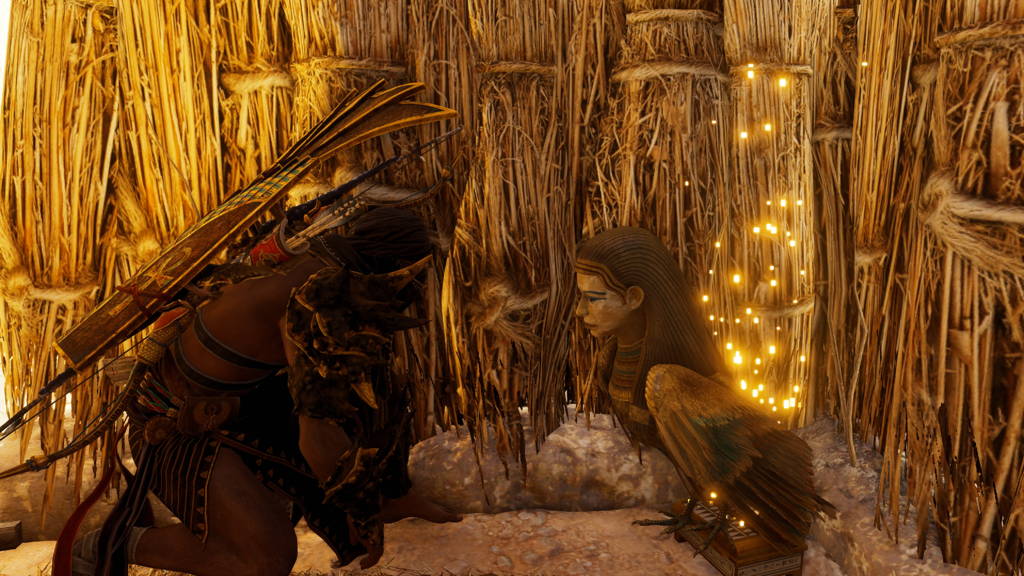 In the afterlife regions human enemies have been replaced by Anubis looking Jackal soldiers, these guys can be pretty tough to beat, especially early on in the campaign. There’s also a new animal in the form of the strange looking Birds called Ba, which are birds with human heads. Although they don’t attack you if you ignore them, they will attack you if you attack them.

There’s cenrtainly plenty of content in Curse of the Pharaohs, with all the main quests and side quests and not to mention all the locations there is to complete in the earthly world as well as in each four afterlife regions, there is plenty of stuff to do.

Although there is no Papyrus Puzzles in Curse of the Pharaohs (I was a bit dissapointed by that), there is some new mysteries nad puzzles to solve and of course treasure to earn once you’ve solved them.

The main quest lines can be completed in around ten hours, but with the side quests, locations and other stuff there is to do that could easily increase to over 40 hours, making Curse of the Phraohs very good value for money indeed. 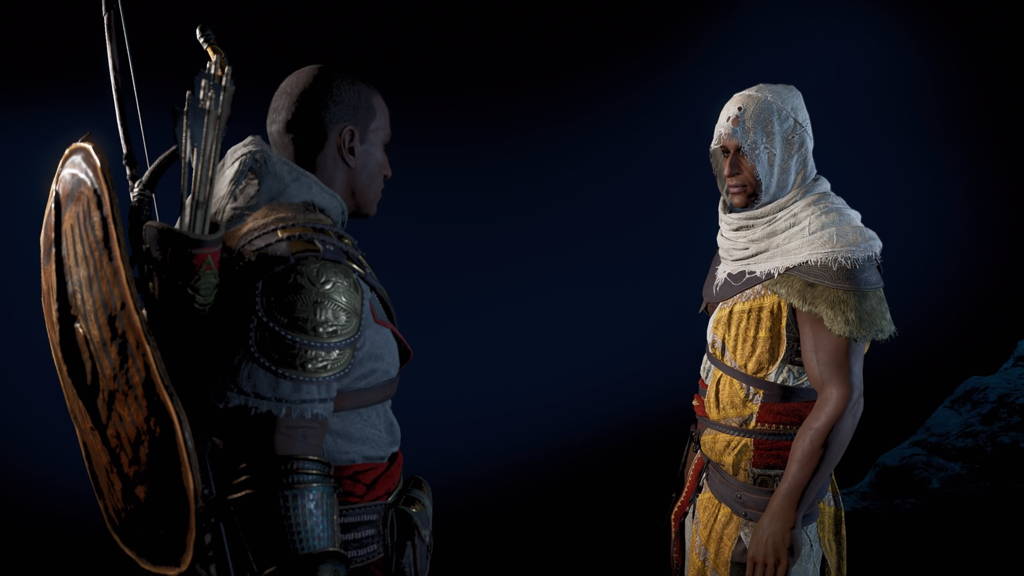 Curse of the Pharaohs is a fantastic expansion to the amazing world of Assassin’s Creed Origins. The stories told are interesting and varied and playing through them and being out and about in the beautifully designed worlds makes me wish I was actually living in ancient Egypt.

I am not sure what Ubisoft has planned for the future of Assassin’s Creed Origins, but I really do hope that we haven’t seen the last of Bayek. I hope Ubisoft have plenty of more adventures planned for us with Bayek of Siwa.

Curse of the Pharaohs is a fantastic expansion to the amazing world of Assassin's Creed Origins. The stories told are interesting and varied and playing through them and being out and about in the beautifully designed worlds makes me wish I was actually living in ancient Egypt.