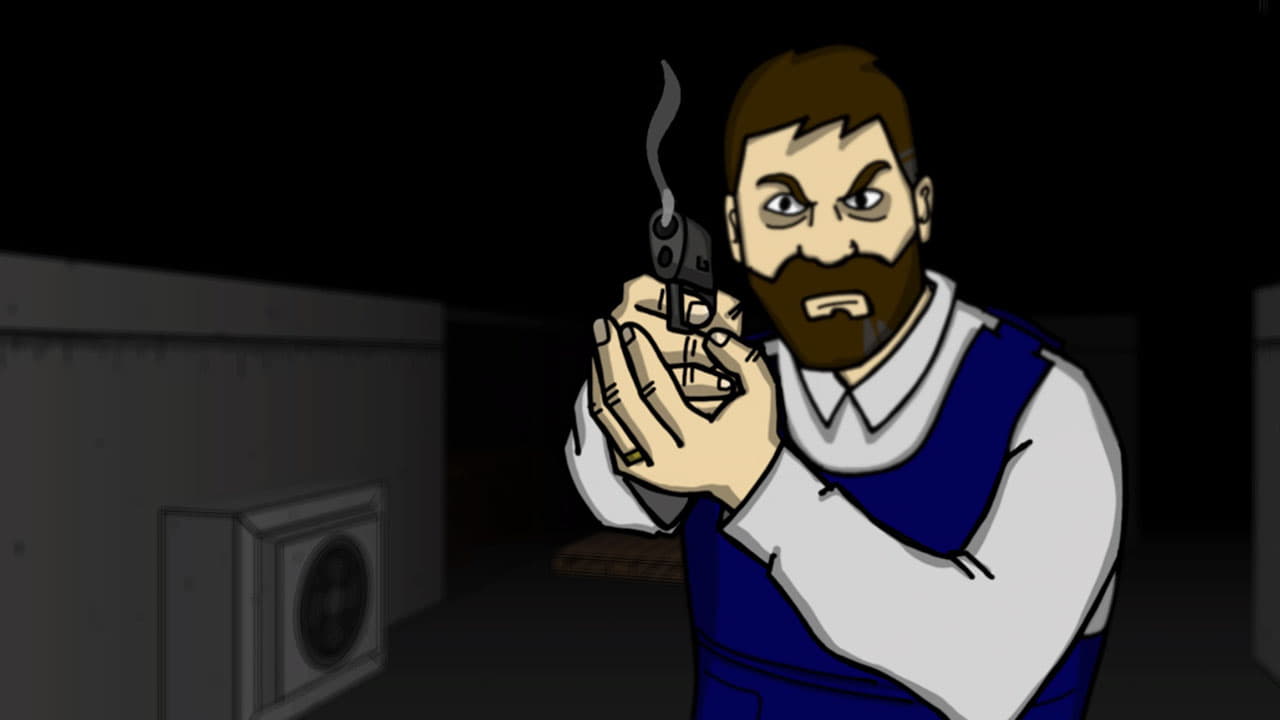 Sometimes low-budget indie games can be just as fun, if not more so than their big-budget AAA counterparts. Sometimes, simple games with hand-drawn graphics can have solid gameplay and a great narrative that draws you in. Broken Mind is one of those games. And in this review, I’ll tell you why I thought it was a pretty damn good game.

Broken Mind is one of these simple indie games. On the surface, it doesn’t look like much but once you dive in and start playing, you realise that the game is extremely good in many ways.

The latest game from 2BAD GAMES a one-person studio, Broken Mind clearly takes inspiration from the many survival-horror games that came before it. But developer Tony De Lucia seems to have made the game stand out with his take on the genre.

Tony has been developing Broken Mind for about five years and you can tell that he has put a lot of blood, sweat, tears and passion into his game. Don’t let the hand-drawn graphics (which I think are pretty great) or the low price fool you. Broken Mind is a top-notch game with a great story.

The narrative of Broken Mind is one of its strongest features. But there is a lot more to like about this game than just its story.

The Story – A Cop Racked With Guilt

In Broken Mind you play as Frank Morgan a cop with a dark past. A past that haunts him and is eating him up from the inside out. Several years prior to the main story of the game, Frank’s Daughter was kidnapped and murdered. Frank blames himself and wishes that he could have been the one to die. Although the protagonist doesn’t say this directly, that’s the sentiment I got from the game’s tightly scripted storyline.

The guilt and pain that Frank Morgan feels due to the death of his daughter is overwhelming him. It’s eating him from the inside out. It is this guilt and pain though that drives Frank to save Laura Campbell, a 15-year-old girl who has been kidnapped during a live broadcast.

The main story sees Frank trying to solve the case of the missing girl. But as he unearths more clues about her disappearance, he is also unearthing the wounds and pain from his past.

During the game, Frank must wrestle with his guilt over not protecting his daughter. And try and ensure that Laura Campbell does not suffer the same fate.

The investigation into Laura’s disappearance is kicked off when Frank is called to Laura’s house. In this early part of the game, you will get your first taste of the simple yet rewarding puzzle mechanics. We’ll talk more about the game’s mechanics in a bit. But ultimately the disappearance of Laura and the investigation to find her, and save her will take Frank on a journey through his own mind. A Broken Mind. Not only will he need to save the teenage girl but essentially he will need to save himself from the guilt that is eating him alive.

Throughout the game, there are lots of little pieces of information that can be picked up. From notes and newspaper clippings and the nightmare-like visions, Frank has of his daughter. The excellent narrative, written solely by developer Tony De Lucia, really paints a picture of a man struggling with guilt. A man who blames himself for his daughter’s death. During nightmare-like levels, it becomes apparent that Frank’s daughter also blames him for her death and feels that he abandoned her. Franks’s wife also blames him too. However, throughout the brilliantly crafted narrative, Frank Morgan eventually does find peace and learns to stop blaming himself.

It is this underlying narrative, that makes the story so great. Not only is Frank trying to save Laura Campbell but he is also trying to save himself.

The story is played out as you explore the game levels and discover the various notes and newspaper clippings that provide the backstory. There are also several cutscenes that enhance the narrative further and draw you deeper into the story.

The gameplay in Broken Mind is simple, but there is a beauty in the simplicity that made Broken Mind a really fun game to play.

I will say that I did play the majority of playthroughs on easy mode. I generally do this when reviewing games because it lets me play through a game without getting stuck for too long. Or without getting frustrated because I can’t get past a particular level or enemy.

If you are a bit of a masochist and you want to play on a higher difficulty then don’t worry. Broken Mind comes with four difficulty options. There is an easy mode, normal and hard mode. There is also a narrative mode with no combat that lets you experience the story, exploration and puzzles. Although playing in narrative mode will lock you out of some trophies.

The main investigation part of the game plays a bit like a point-and-click adventure game. You explore the various levels and pick up items that you can then use on objects to help you solve puzzles, figure out door codes and so on.

There is more to Broken Mind Than Meets The Eye

I actually really liked this approach to the puzzles in Broken Mind. It made exploring and trying certain things more enjoyable. And solving certain puzzles was very rewarding. Although the mechanics of the puzzles and exploration may appear simplistic, solving them does actually require a bit of thought and a bit of looking around. For example, there is one collectable that I was missing and I did not figure out how to get it until my fourth playthrough. So bear that in mind during your time with Broken Mind, the game may seem simplistic but there is a lot more to it than meets the eye.

Combat in a broken mind is also simple but oddly satisfying. In the game, you will either have a gun, a knife or your fists and feet to fend off enemies. When I say combat is simple I don’t mean that the enemies are pushovers. In easy mode, certain enemies will go down with one shot to the head but using a knife or your fists against them does present a bit of a challenge and I found myself reaching for the medkit on more than one occasion.

The only downside to the combat is that there are only really two different types of enemies (excluding a boss fight which was also really good). I felt that there could have been a bit more variety in the enemies, even if it was just a change in appearance. Nonetheless taking the enemies down was just as satisfying as any other game I have played.

There is a total of 10 chapters in Broken Mind and several different levels. The various chapters will take you to places like a house, a Police station, an abandoned hospital a school and outside wooded areas. The levels aren’t particularly big but there is certainly plenty to explore. And enough variety between the levels and chapters to keep the exploration interesting.

As I mentioned earlier in the review, don’t let the hand-drawn graphics fool you about Broken Mind. Although all the characters and other assets are drawn by developer Tony De Lucia, they don’t really look or feel cartoony.

Broken Mind has a pretty dark storyline and I think De Lucia has done a great job of creating a unique, hand-drawn art style. With the game’s artwork, De Lucia has managed to find a line between the hand-drawn style but at the same time, he has kept the serious and dark tone of the game.

Although I have played a 2BAD GAMES game before, namely Brutal Rage, I wasn’t sure what to expect with Broken Mind. And even though developer Tony De Lucia’s previous games have been r pretty great, I didn’t set my expectations too high.

However, after my first playthrough, I was very pleasantly surprised by how well everything in the game was put together.

Broken Mind Is A Pleasent Surprise

The intriguing narrative, the simple yet enjoyable puzzles, the basic yet satisfying combat and the hand-drawn art and level design all came together to create a delightfully dark and wonderful game. After my second, third and fourth playthrough I found myself enjoying and appreciating the game even more.

Broken Mind’s tale of a cop on the brink of suicide, filled with guilt, pain and suffering and self-blame are fairly dark themes but the narrative was utterly compelling. Sure, Broken Mind’s story might not be comparable to something like The Last of Us part 2 but it was damn good nonetheless.

I can’t help but get the feeling that the developer thinks that he may have taken a bit of a gamble with Broken Mind. If he has then he has hit the jackpot as Broken Mind, for a low-budget game developed by one person is quite outstanding.

It is also worth mentioning that I only experienced one bug during my playthrough. It was a pretty big bug that somehow got me stuck inside a door. I reported this to the developer and I have to give him praise for fixing it so quickly. A couple of days after reporting the bug, the developer messaged me on Twitter to let me know that a patch had been released. It’s not very often that developers will fix bugs this quickly and given that 2BAD GAMES is a one-man studio, I think that deserves some praise.

Broken Mind Is Out on June 21st

Broken Mind is a game with a dark but intriguing narrative. Simple yet satisfying puzzles with a point-and-click adventure feel. It's a short game but has a whole lot to offer in terms of story and gameplay. Give it a try, you won't be disappointed. 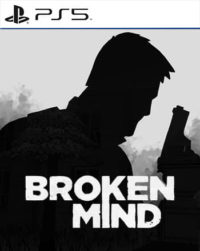