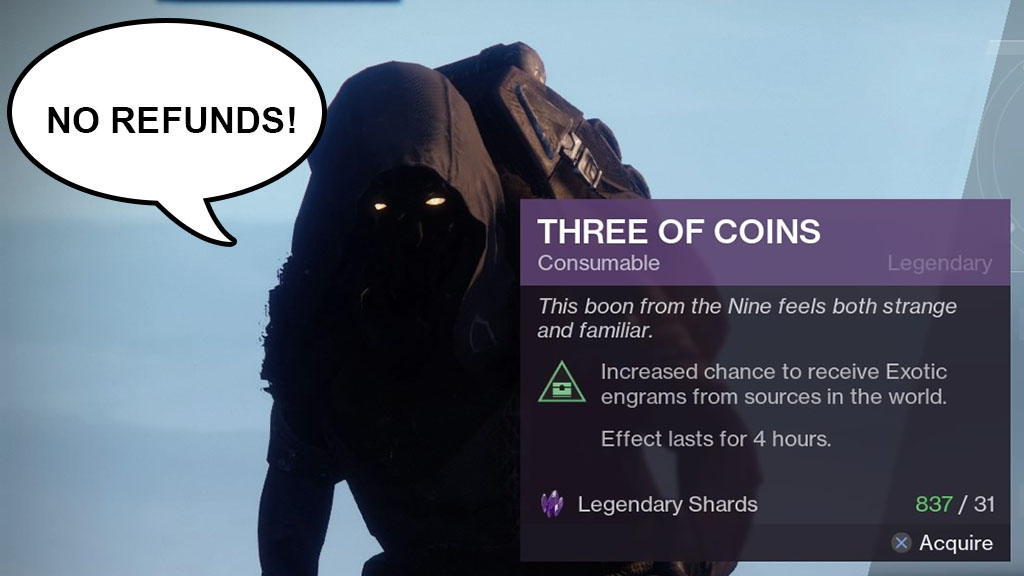 Looks like it’s been pretty much confirmed that Xur has been selling faulty Three of Coins to unsuspecting Guardians. It’s only been a few days since Xur Boy Trotter began selling the new Three of Coins – which is supposed to give you a greater chance of getting exotic engram drops – and already the Destiny 2 community has been raging that Three of Coins just don’t seem to work.

Users on r/DestinyTheGame sub-reddit began noticing something was not right with Three of Coins and decided to do some testing. with one user playing for 16 hours and doing numerous Heroic Strikes to only be rewarded with absolutely hee-haw Exotic Engrams.

It wasn’t just the fact that Three of Coins where clearly defective though, the community was also angered by Bungies apparent lack of transparency about what chance Three of Coins actually gives you in getting exotic engram drops.

Bungie have responded to the community regarding Three of Coins and have explained what the percentage increase is in your chances of getting an exotic engram to drop when you have Three of Coins applied.

So it looks like Bungie are now well aware of this issue and have said that they look to fix the faulty Three of Coins in a future hot fix sometime in early 2018.

So, should you continue to buy three of coins from Xur? Well, based on current information Three of Coins appears only to be bugged in Heroic strikes so it is possible they could work as intended and grant that 50% chance increase when used in other activities.

With fated engrams now on sale also (which some users are reporting are giving duplicate exotics when they are supposed to only give exotics not already in your collection) and chances of exotic drops from Public Events and milestone engrams, exotics are not as hard come by as they where in vanilla Destiny 1 so it begs the question, are Three of Coins even worthwhile at all?