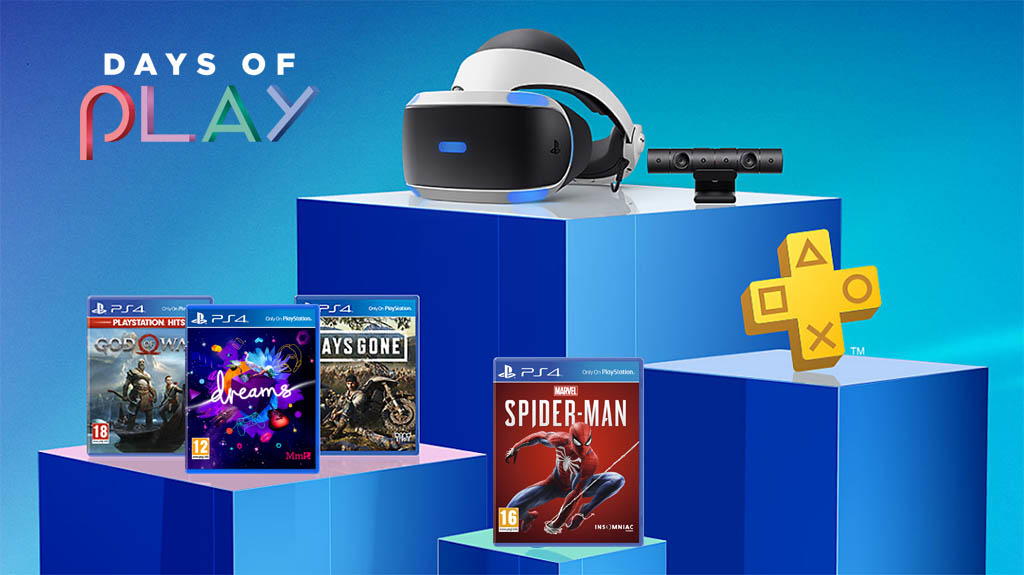 Days of Play deals for the UK and Europe are now live at selected retailers. Days of Play runs until 8th June, so if you’re looking for a bargain on some PlayStation goodies, now is the time.

Head over to the Days of Play 2020 campaign website and check out all the available Days of Play deals. There is plenty to choose from including great deals on PlayStation VR bundles, PlayStation Hits games and PS Plus memberships. As iI mentioned in an article a few days ago, the PSVR deals give you the most bang for your buck. If you haven’t tried PSVR yet now is a good time to dive in. You’re saving about £70 on the Mega Pack with Days of Play, compared to the price it was previously.

Here are some of the best deals happening right now for Days of Play 2020. These are my personal preferences, remember to take a look at the Days of Play website for whatever takes your fancy.

Several UK retailers are involved in Days of Play 2020 including Amazon, GAME, Argos and Smiths Toys. All the deals seem to be the same between retailers although I have noticed one or two are selling things a bit cheaper than the price advertised on the Days of Play website. It’s always a good idea to shop around for the best deals.

I think I’ll be getting this deal as my PS PLus expires at the end of the year.

Dreams – Dreams is an amazing game/game creation tool/art tool/sculpting tool. You can create anything and play anything other people have created. Even if you’re like me and your creativity only stretches to drawing stickmen, you’ll soon be creating some fantastic stuff in Dreams. It’s pretty easy to get into and start making things. There are also tons of tutorials on YouTube to help you along the way.

Most of the retailers are selling a physical copy of Dreams at the recommended £24.99. However, Curry’s PC World is selling it for £21.99 for a physical copy.

Days Gone – Days Gone is a severely underrated game. It’s got great gameplay, a great open-world and one of the memorable parts of any game I’ve ever played. Oh, and it’s got a shit ton of Zombies to kill. The recommended price for Days Gone is £15.99 but the cheapest price right now is from Argos who are selling it for only £13.99.

Marvel’s Spider-Man – Your favourite neighbourhood Spider-Man is going cheap on Days of Play. This PS4 exclusive is an absolute must-play for any PS4 owner. The recommended price is £15.99 but Curry’s PC World are selling a physical copy for £14.99

God of War (PlayStation Hits) – Much like Marvel’s Spider-Man, God of War is a must-have for any PS4 owner. The gameplay and story are just so good. The Days of Play recommended price is £11.99. Curry’s PC World are doing it a wee bit cheaper than the rest at £10.99.

If you have never tried PlayStation VR then you have been missing out on a whole new experience. Luckily there are some tasty PSVR deals on offer in this years Days of Play.

PlayStation VR Mega Pack – The PlayStation VR Mega Pack comes with all the same kit as the Starter Pack and also has vouchers to download digital copies of 4 great PSVR games (and PlayStation VR Worlds). Astrobot Rescue Mission, Skyrim VR, Resident Evil 7 Biohazard and Everybody’s Golf VR. The recommended price for the Mega Pack is £229.99. The cheapest deal for this is Curry’s PC World who are selling it for £229.00 on the nose.

Note: None of the above VR bundles appears to come with Move Controllers. These are highly recommended, especially for games like Everybody’s Golf VR. They don’t seem to be in the Days of Play sale at the moment. But you can pre-order a bundle comprising of a pair of Move Controllers and Iron Man VR for around £90.00. PlayStation Move Controllers on their own are usually around £60.00.

And that is my pick for the cheapest Days of Play Deals for 2020.