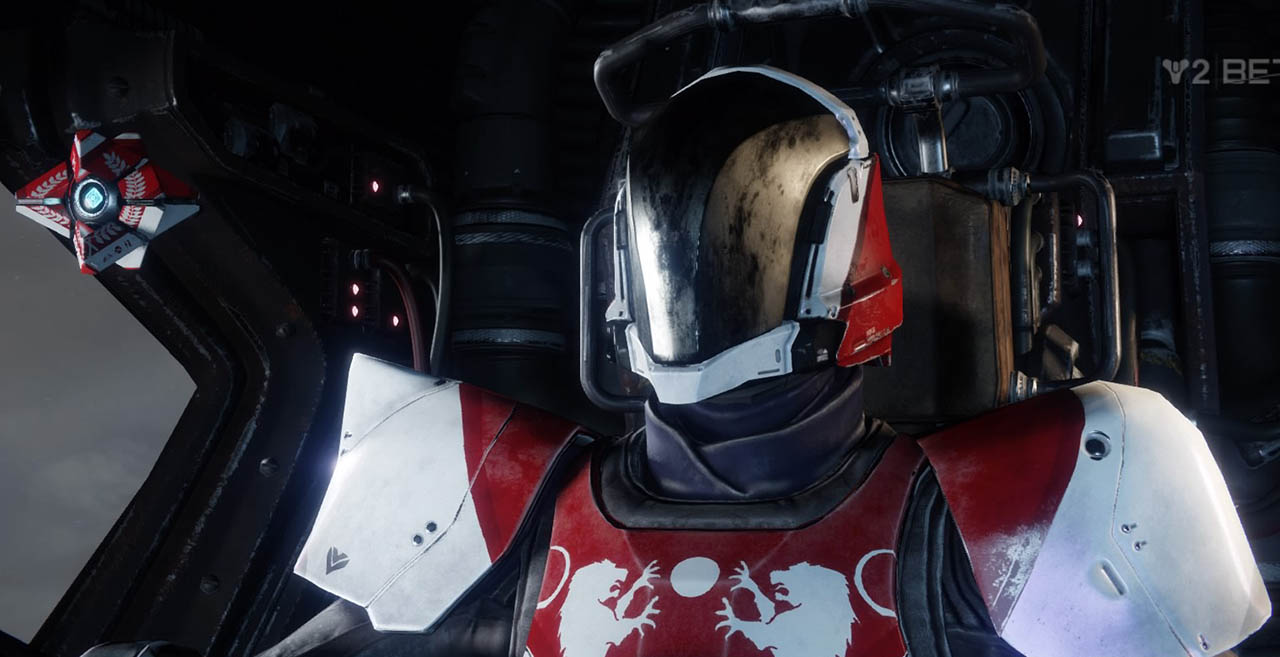 The Destiny 2 Beta finally went live yesterday if you had pre-ordered Destiny 2 that is and got early access. I had been keeping my eyes glued to any Destiny 2 Beta news and to r/DestinyTheGame in the days leading up to the Beta’s release, in some ways people seemed to be just as hyped and excited to play the Beta than they are the full game.

I must admit I was pretty excited myself, I actually took yesterday and today off of work so I could get some extra time with the Beta. So, was all the excitement worth it? Let me reacquaint you with the Beta so far.

The Homecoming mission is the opening mission of Destiny 2. Before the mission starts there is a new cut scene. You are in your ship with Ghost, flying back towards the last city and the Tower, Ghost is trying to make contact with the tower, but no one answers.

We’re now at the Tower, there is devastation everywhere, the tower is burning, fires all over the place it looks like a literal war zone. Moving forward we encounter some cabal and are greeted with the stark realisation that the Tower is under attack and is pretty much fucked.

Seeing the tower in such a state of devastation was rather surreal, especially when you reach the Tower Plaza where Zavala is holding off the Cabal onslaught. After helping Zavala kick some Cabal ass you make your way through Tower North, where the speaker usually resides. Here you face off with some more cabal and you meet up with Ikora, who then unleashes a Nova Bomb at an incoming Cabal ship and then proceeds to surf on top of it.

You then proceed towards the North Tower, through that big door that’s always closed where you have to deal with more cabal until you meet with Amanda Holliday who gives you a lift to one of the Cabal ships. After killing some more Cabal you encounter the first big Cabal boss, Brann, The Unbent Blade.

After you dispense with Brann it’s off to another part of the Cabal ship where you have to destroy some turbines and dodge some big things that spin around. Destroying the turbines is rather easy, just shoot them. After that is mission done.

I rather enjoyed the Homecoming mission, it was certainly fast paced and full of action, definitely no shortage of enemies to shoot. It was a reasonable length too, not too short and not too long.

One  gripe I had was there where no puzzle type elements, I know Destiny isn’t a puzzle game, it’s a shooting game, but it would have been nice to have some things to do that exercises your brain and not just your trigger finger.

My only other complaint about the Destiny 2 Beta is that my Guardian never said a single word, not even a “Fuck you Ghual!” as he was getting his light less ass handed to him by the massive space turtle. I was really hoping that Destiny 2 would bring more depth to our characters, make them speak, make them interact more.

Maybe they will in other missions, I certainly hope so but the fact that my Guardian had no dialogue in that first mission, nothing to say, no emotion as he looked at his devastated home, I hope he is going to have plenty to say in other Destiny 2 missions, if not, I will be quite disappointed. 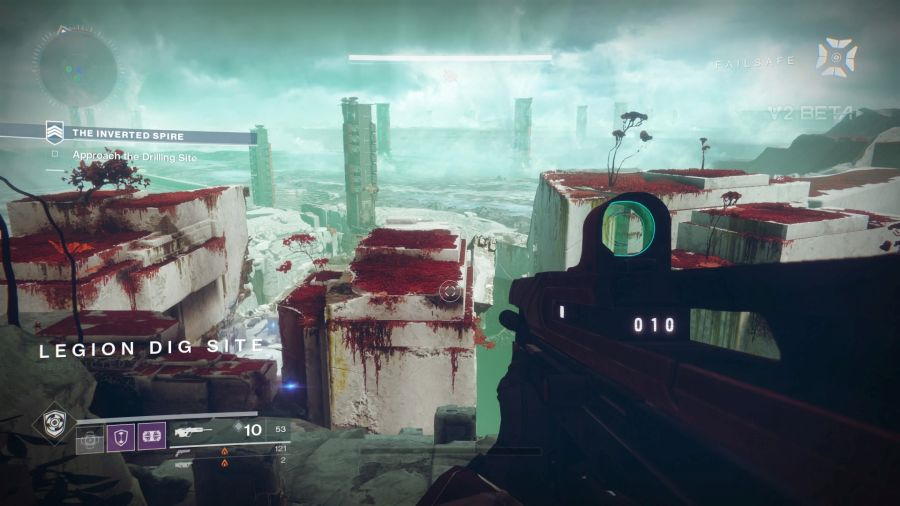 The Inverted Spire strike takes place on Nessus, a rather lovely looking planet filled with red foliage and rivers and waterfalls of Vex milk everywhere.

Like the Homecoming mission, there was certainly plenty of action with tons of challenging enemies to unload on. The action was fast paced and at some points overwhelming but exciting, I definitely died a few times.

I also got to encounter some of the new enemies we will be seeing in Destiny 2, the ferocious dog like War Beasts where pretty scary and they seemed to attack in packs. Using your super, grenades or a rocket launcher is probably a good idea when there is a lot of these scary things trying to bite your face off. There was also the Gladiators, huge Cabal things that dual wield solar blades, these things where pretty tough and there attacks where relentless.

The end boss battle against Protheon, Modular Mind was pretty decent. I felt though that they could have included something a bit more puzzly to the strike so it’s not just stand and shoot at boss, stand and shoot at enemies, dodge boss attacks, dodge enemies and so on.

There was some mechanics to the strike and the boss fight, the boss changed elements from void, arc and solar. I’m not 100% certain if shooting him with the corresponding elemental weapon was dealing more damage but it probably was.

The other thing I liked about the Inverted Spire strike was how big it was, it was a fairly lengthy strike I thought. The area that it took place in was also fairly large and you could go off course to explore. This was especially true att he start of the strike where you could take a completely different path and encounter Fallen fighting Cabal as well as Vex.

There appears to be some kind of public event takes place if you go towards the right at the beginning of the strike, you can kill some Vex Hobgobliins and it activates the hoop things that catapult you, you also encounter a yellow bar Storm Minotaur. I didn’t manage to kill the Minotaur but some other users over on r/DestinyTheGame have, unfortunately it doesn’t seem o do anything, although, the general consensus is that it possibly opens up a locked door, which you can find on the strike and is possibly for one fo the Lost Sector missions.

Overal, the Inverted Spire is a very well done strike, if the other strikes in Destiny 2 are going to be like this, then I can’t wait to grind them 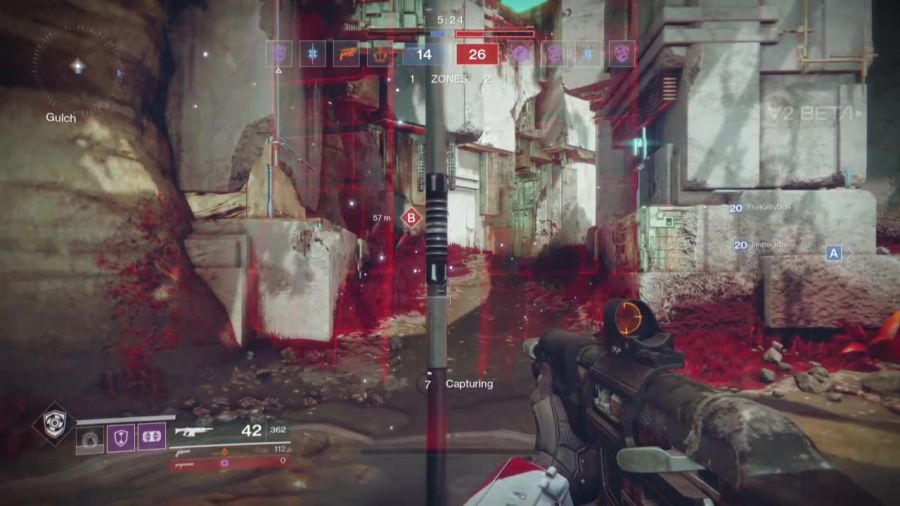 I do enjoy the odd game of Crucible, not as much as I enjoy PvE activities but when the PvE content runs dry you gotta give PvP a try.

PvP felt very much similar to Destiny 1 PvP, the changes Bungie have made to the sub-classes with regards to movement and abilities is the only thing that makes it feel any different in my opinion. Saying that though, I thought some of the weapons, like the Scathlocke Auto Rifle and some of the Sub Machine Guns felt a lot like Call of Duty rather than Destiny. Not a negative thing though.

The maps that are available in the Beta, Endless Vale for Control and Midtown for Countdown, where not too bad. They where of Decent size with open areas for longer range combat and tighter spaces for close quarters combat.

I enjoyed the new Countdown game mode, pretty similar to Search and Destroy on Call of Duty, it definitely needs good communication and teamwork rather than just run and gun, every Guardian for themselves type of gameplay.

The new changes to Control definitely improved the game mode quite a bit, it certainly made it more about capturing the zones rather than a game of Clash with flags as it was in Destiny 1.

Even though PvP games are now 4 v 4, matches still felt fast and action packed with no real slow down of gameplay at any point, just fast and furious Guardian on Guardian shooting action.

I didn’t notice any lag or any other connection issues either, Destiny 1 was plagued with lag and latency issues and even though this is only a Beta and it’s difficult to tell whether this sort of connection quality is going to be maintained throughout the main Destiny 2 release, it would certainly seem that Bungies new networking magic is doing the trick. 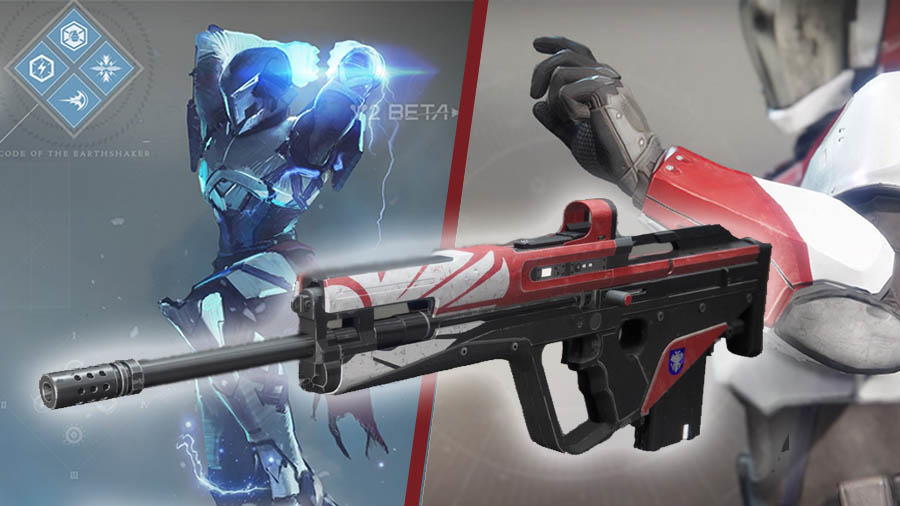 The three new subclasses in Destiny 2, Dawnblade, Arcstrider and Sentinal are not too bad maybe. I’m not sure I’ve played with each of them long enough to form any real opinion on whether they are good or not.

I will say however that the subclasses or supers in general don’t feel particularly powerful, I am pretty certain that during a game of control I survived one of those flaming ball things from the Dawnblade when I was full health.

I think I will need to play with the new subclasses a lot more before forming an oppinion. As for the reworked subclasses, Striker, Voidwalker and Gunslinger I am not too keen on the roaming of the Striker. To me the Striker should be there to strike fast and hard. See a big group of enemies, Titan smash! They are gone.

I think there is less of an element of surprise when the super is roaming rather than jumping into the middle of some enemies opportunist like and smashing them into oblivion with your fist of panic.

Overall, not majorly impressed with the supers but I will need to play with them more. As for the other abilities, grenades don’t seem to much different, the jumping abilities certainly feels a bit different and the Warlock jump I feel is just far too floaty. I will maybe do a post on the subclasses once I’ve spent more time with them.

As for weapons, I’ve not encountered any yet that seem to be really outstanding, probably get a better idea of whats hot and whats not when the full game comes out. The three exotics that we get in the Destiny 2 Beta, again nothing that jumps out as really amazing.

The Risky Business exotic auto rifle, which you acquire in the Homecoming mission if you play as a Titan, looks and feels like it should be in the Heavy Machine gun class, it’s a gatling gun type weapon but it felt like it really was not that powerful at all, felt like a fairly mid impact auto rifle.

I am certain the weapons will be reworked and rebalanced before the full game is out, the last thing we want in Destiny 2 is exotics that don;t feel exotic, we had that trouble with Destiny 1.

As for armour, nothing that particularly jumps out as amazing although it does look good and we have yet to see it with shaders. On the subject of shaders, there now seems to be a shader slot for each piece of armour, so could this mean you can apply different shaders to different bit of your armour? I would say, most likely.

Once thing that was complained about in Destiny 1 was lack of customisation, in Destiny 2 if we can mix and match shaders, for example, black shader on your chest piece, blue on your helmet, red on your gauntlets, green on your leg armour and white on your cloak it could make for some really unique and rather snazzy looking Guardians. There appears to be shaders for ships as well.

Well, that does it for my first impressions of the Destiny 2 Beta, there’s still about 4 more days to go until the Beta is finished, I will get a lot more play time in and breakdown some other aspects into separate posts.