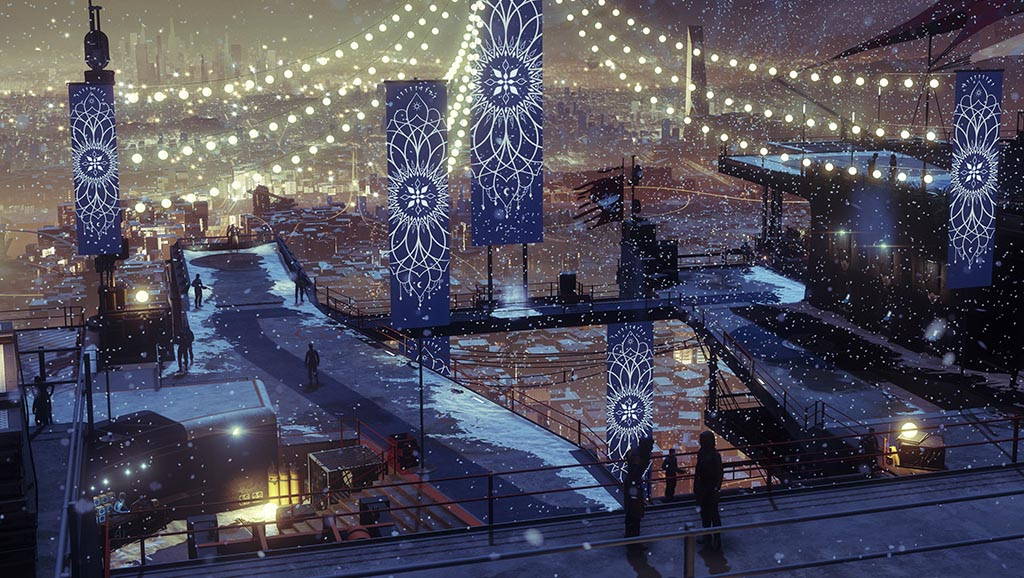 The winter nights are drawing in, snow is starting to fall (not where I live though, it’s pissing of rain as usual) Christmas decorations are lighting up the night sky in every City Centre and shopping mall and Santa is charging up his brand new Tesla Model-S electric  sleigh.

Even in the worlds of Destiny 2 in the aftermath of the Red War and the constant threat of attacks by numerous alien races things are going to start looking a bit more Chrismassy and wonderful.

The Destiny 2 The Dawning event start next week and Bungie has detailed what we will be seeing and doing during the festive period.

Destiny 1’s The Dawning event was rather good last year, it gave us Sparrow Racing, new guest and gear and strike scoring and a couple of new exotics. It doesn’t look like we’ll be getting sparrow racing this year sadly, with the majority of really good sparrows locked behind Eververse loot engrams that probably wouldn’t be a great idea. We will be getting some other cool stuff though.

Tired of using the same old weapons to blast down enemies? Fear not, you can now use Snowballs to defeat your enemies. There will snowball piles everywhere, at the Tower, the Farm and out in the world too. In social areas you will be able to use snowballs to tag your friends and in Strikes you can use them to stun enemies and deal massive damage. Sounds like awesome fun, smacking a cabal in the back of the head with a snowball, that’ll teach em to invade the Last City.

During this years The Dawning the Crucible will turn into complete Mayhem. The much-loved mode from Destiny 1 will be returning for the holiday event. Supers and abilities will charge faster than Santa wolfing down your cookies on Christmas morning and point scoring will be cranked up to 11. Sounds like a blast.

Sounds like there will also be new milestones to complete during the three week Dawning event. Compete in Crucible Mayhem or in Strikes to complete milestones and you will be rewarded with a Dawning Engram. Tess Everis and her Eververse trading empire will also be rearing its ugly head during The Dawning, according to the Bungie blog, if there’s a specific Dawning item you would really like, Tess will refresh her inventory each week of The Dawning, so you can use all that saved up Bright Dust to get your hands on some Dawning goodies.

Tess will have every Dawning themed exotic (ship, sparrow, ghost and emote) as well as every Dawning themed legendary armour piece. Although it’s not specifically stated by Bungie what the Dawning engram will give you, I would have to assume that it will give you a chance at getting one of the items above and if you don’t get lucky with RNG then you can use your Bright Dust to buy them. If you don’t have enough bright dust though, you’ll probably need to fork out cold hard cash.

In this Years Dawning event there will also be some quest type activities. You will be able to pick up a Dawning Gift Schematic from the Tower Bazaar and head out into the Destiny 2 worlds and craft unique gifts for the vendors and agents you find in the tower and elsewhere. You can then give the recipient their gift and you will receive a gift in return. You will be able to participate in this gift giving every day of the Dawning event.