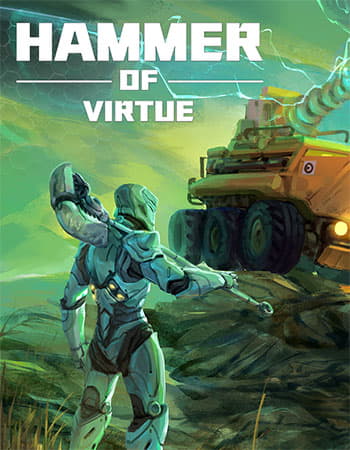 Hammer of Virtue, is a skill-based action game set in a fully destructible land of tomorrow from Swedish developer No Pest Productions.

Drop into a futuristic world where terrorist organizations deploy cybernetically-enhanced, armored animals to reap chaos. Faced with such threatening foes, the Unified Realm elects to fight metal with metal and restore order through aggressive extermination tactics. Enter the battlefield as the Unified Realm’s greatest hope of victory, a melee soldier armed with a powerful hammer and tough-as-nails armour, then deliver crushing blows against enemies one hammer strike at a time.

The sword might be mightier than the pen, but in Hammer of Virtue, a super-powerful hammer puts them both to shame. Develop a deep understanding of a rewarding combat system to sow chaos during each encounter. Utilize destructible environments and over-the-top ragdoll physics to bowl enemy animals into one another and topple trees on unsuspecting armoured bears. Time high and low blocks before unleashing counterattacks that bring even the mightiest of foes to their knees.