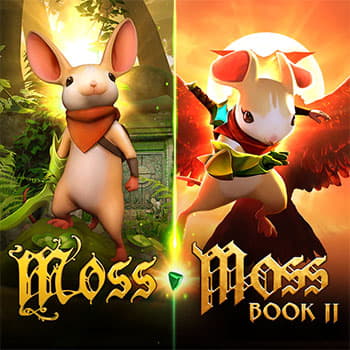 The Moss franchise is made up of two of the all-time top-rated VR games and has received more than 100 global industry awards and nominations. The franchise has quickly become a ‘must-play’ for all VR users with its unique take on first-person/co-op gameplay, absolutely stunning environments, storytelling, and characters as rich as real life. Pick up the bundle today!

MOSS
Moss is a single-player action-adventure puzzle game and new IP from Polyarc tailor-made for the VR platform. It combines classic components of a great game—such as compelling characters, gripping combat, and captivating world exploration—with the exciting opportunities of virtual reality.

In Moss, players meet Quill, a young mouse with dreams of greatness beyond the confines of her settlement. While exploring the woods, she finds a mysterious Glass Relic and ancient magic is awakened. With her uncle now in grave danger, Quill must embark on an epic journey—and she needs you there by her side. Together, you’ll travel to forgotten realms, solve challenging puzzles, and battle menacing enemies. Alone, no one can conquer what you’re up against. But united, you just may defeat even the darkest of villains.

Moss: Book II
Moss: Book II is the award-winning sequel to the fan-favorite VR game Moss and is being hailed as a top contender for VR Game of the Year and has secured a spot on multiple essential and must-play lists.

Moss: Book II picks up right where the story in Moss left off with Quill’s adventure continuing with the revelation that a winged tyrant is hunting her within the castle where her uncle was held captive. But Quill has a plan of her own, one that could finally end the merciless rule of the Arcane and save the world from a great unmaking.

The journey will be trying—filled with triumph and heartbreak alike—but new allies, old friends, and the very nature of the castle itself can offer help along the way. Yet in the end, it is you alone who can lift Quill up to save this world, and together, rise to legend.