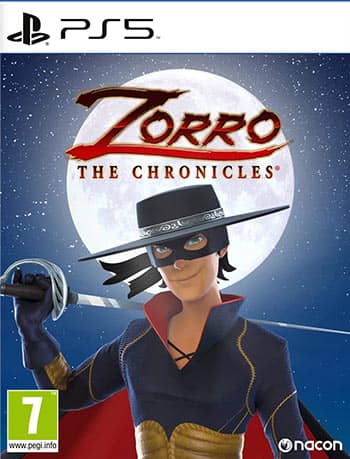 Embark on an epic adventure set in nineteenth-century Spanish California. Play as the legendary Zorro or his fearless sister Ines. Protect the weak and innocent townspeople from the evil general and his soldiers. Develop skills to become a master swordsman. Disarm your enemies with a whip, a sword, spectacular moves, and humour! Deflect their attacks with acrobatic moves and lightning-quick reflexes. Leave your mark on them with a ‘Z’ from the tip of your sword!

Don Diego de la Vega, the beloved son of a respected landlord, is returning to California after five long years in Spain. Longing for his father and sister Ines, his heart is filled with joy in anticipation of seeing them again and returning to his peaceful town. However, things are no longer the same as when he left. The town is now ruled by Captain Monasterio whose greed only rivals his ambition. Poor townspeople who cannot pay exorbitant new taxes are sent to jail, and their families are forced to work off the debt. The once joyful community is now a place of oppression and hopelessness.

Don Diego cannot stand the injustice he sees, but at the same time, he knows he cannot openly fight Monasterio and his soldiers. However, where there’s a will, there’s a way. Don Diego acts upon the old Spanish saying, “If you can’t fight like a lion, become a fox”, and this is how the legend of Zorro is born!