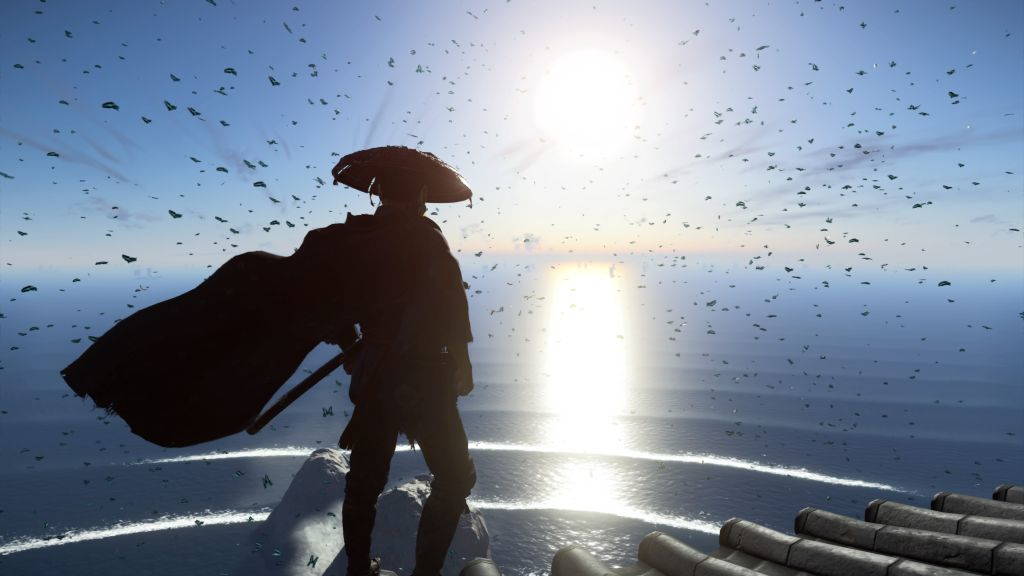 It’s sad to think that Ghost of Tsushima will be the last First-Party PlayStation Exclusive on the PS4. As far as exclusives go, Sony’s eighth generation of console hasn’t gone out with a whimper, but rather with a clattering bang of cold steel striking against the blade of the Mongol Empire.

Yes, Ghost of Tsushima is a tremendous game and a fitting conclusion to a first-party generational line-up which has seen masterpieces like Bloodborne, Horizon Zero Dawn, God of War and The Last of Us Part 2.

Ghost of Tsushima, from Sucker Punch Productions, may not be the most original game in the world. And, it certainly seems to take inspiration from other open-world games, like the last two Assassin’s Creed Games, Origins and Odyssey. 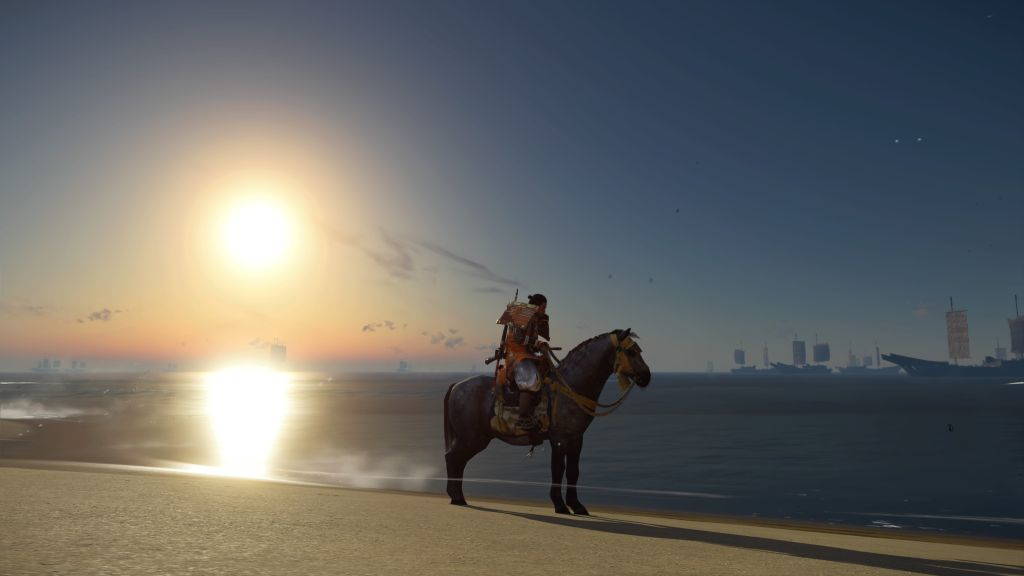 Similarities aside, Ghost of Tsushima stands on its own two feet as a fantastically crafted open-world, action-adventure game.

Ghost of Tsushima takes place in 13th Century Japan. The Mongol Empire has invaded Tsushima Island and it’s up to Jin Sakai – the main protagonist – to drive the Mongols from his home and avenge those killed by the invading force.

You play as Jin, the last remaining Samurai on Tsushima. As you guide Jin through the 3 act story, you will encounter lots of bloodshed, vengeance and betrayal. There’s even some family conflict with Jin’s Uncle, Lord Shimura.

Throughout the story, Jin will recruit several NPC’s to fight alongside him in his efforts to drive the Mongols from Tsushima Island. The NPC’s that Jin recruits all have their own interesting backstories.

The Tales of Tsushima not only serve as extra content but flesh out the stories of Jin’s new-found friends. They also serve as a bit of lore and backstory to the Island of Tsushima and it’s inhabitants.

Yuna (pictured above with Jin) was one of the main characters in the game who fought alongside Jin. We meet her early on, as she saves Jin life after a vicious Mongol attack.

I felt there was definitely a bit of romantic tension between Jin and Yuna. I would have liked to have seen that side of their characters fleshed out about more.

There was nothing particularly unique about the story of Ghost of Tsushima and it didn’t have the tense, emotional rollercoaster moments like The Last of Us Part 2. It was very well written though and the voice actors did a great job portraying their respective characters and there was certainly a couple of “well, never seen that coming” moments.

Ghost of Tsushima’s combat was definitely one of the highlights of the game for me.

At first, I found the combat quite challenging and I was playing on easy. Getting used to pulling off some cool combos and remembering to change stances depending on the type of enemy I was facing was a struggle at first.

However, after a few hours with the game, I became a master with the Katana and was winning stand-offs and taking down teams of Mongols like a Samurai master.

The more I played and the more technique points I earned to unlock new techniques, the easier and more enjoyable the combat became. I went from dying at the hands of the Mongols very five minutes to being a near-invincible Ghost, leaving bleeding corpses of Mongols in my wake.

Tools of the trade

Ghost of Tsushima isn’t a loot-based game where you can loot different weapons and create loadouts. There is only a handful of weapons available, your main weapon being the Sakai Katana.

Fewer weapons, in this case, does not equal less fun and destruction. Your Katana can be upgraded through collecting supplies and various other materials. Upgrading really does make a difference.

I went from feeling like I was barely scratching the enemies at the beginning of the game to cutting through enemies like a hot knife through butter. 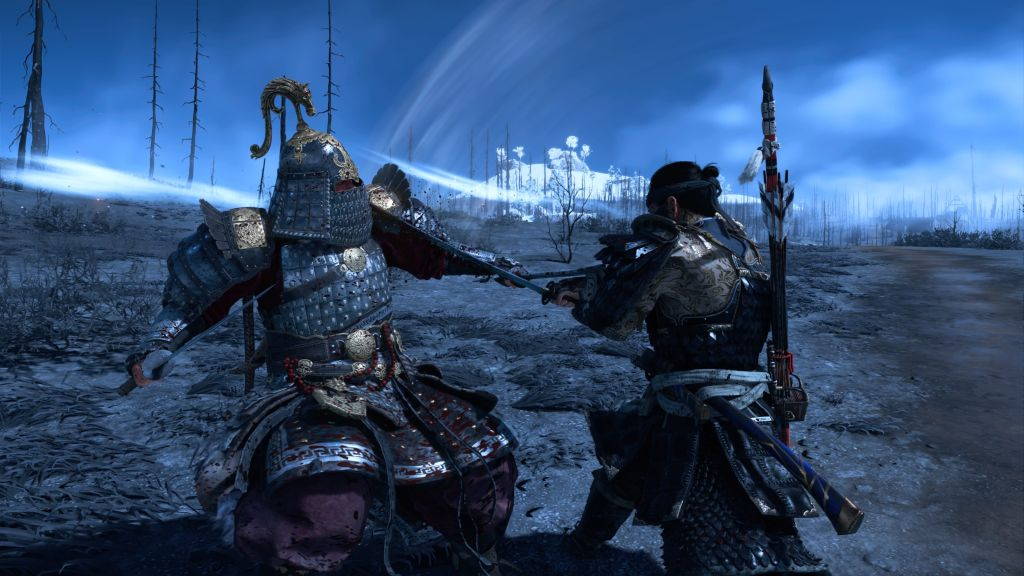 Also at Jin’s disposal is a short blade which is used for assassinations. Assassinations are where the game really does look and feel like Assassin’s Creed. You can sneak up behind enemies and take them out, or leap off of roof or cliffs and assassinate the unsuspecting enemy below.

Although playing the stealthy assassin was fun at times, there are several missions that force you to take a stealth approach. Of course, if you were spotted you would fail the mission and had to start from the last checkpoint.

Sometimes the forced stealth missions got a bit frustrating, this was compounded even more by certain missions where you weren’t allowed to even stealth assassinate an enemy. These missions were essentially games of hide and seek.

These types of encounters were probably the only downside to the combat.

Straight as an arrow

There is more than just sword-based melee combat and close-range assassinations in Ghost of Tsushima. During the game, Jin will acquire a couple of bows, namely the half-bow and long-bow.

Bow combat didn’t feel particularly great at first. It wasn’t as satisfying as using the bow in Horizon Zero Dawn for example.

But, much like the Katana, upgrading the bow, unlocking more techniques and equipping the appropriate charms, the bow Bow became an essential tool in my arsenal and was great for taking out enemies at long range.

The game also offers other avenues to increase Jin’s lethality or to enhance Jin’s other techniques. Charms can be found by visiting hidden shrines or by completing missions and can increase your damage output, your defence or your stealthiness.

So, even though there’s not much in the way of weapon variety, you can still create some strong builds depending on how you want to play the game.

A Dual Between Two Warriors

Duals force you into a particular camera perspective to take on your opponent. But this didn’t diminish the feeling of a tense battle. Being heavily inspired by old Japanese Samurai movies, duals start off with a short cutscene.  The two combatants facing each other, hands on weapons, ready to draw.

During a Dual you are only able to use your Katana. You can’t use your bow or any other weapons like black powder bombs. This really adds to the excitement of the battle as you attempt to parry, dodge and counter-attack to defeat your opponent.

The majority of the Duals were fairly challenging, even after unlocking techniques and equipping charms. Duals were fun and rewarding when you emerge victoriously and were a welcome break from the open-world combat.

Combat in Ghost of Tsushima is pretty solid and provides enough challenge to keep the game interesting and engaging.

With the exception of the forced stealth parts and unskippable cutscenes, fighting enemies was very enjoyable.

Swapping between different stances for different enemy types and the ability to construct some cool combos and moves definitely made combat one of the main highlights of the game.

One of the best looking games this generation

Ghost of Tsushima doesn’t just have a great story and some solid combat. It is also one of the prettiest, most stunningly beautiful looking games of this generation. 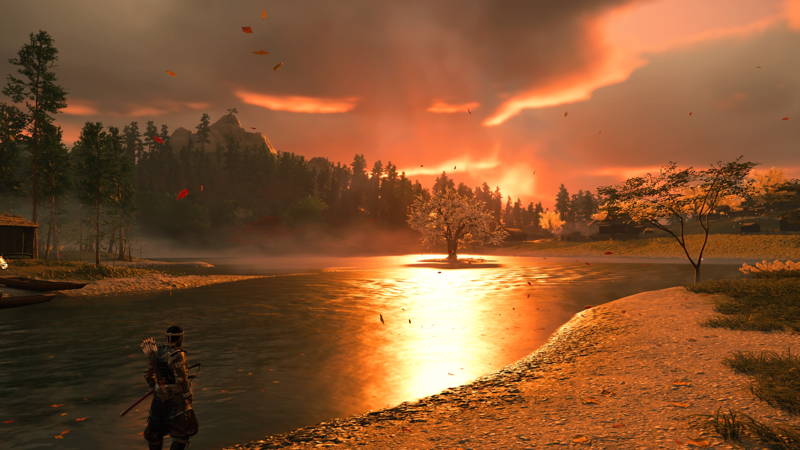 The artists at Sucker Punch have done a fantastic job of creating an absolutely eye-popping, jaw-dropping 13th century Japanese Island.

From the marsh areas to the south, the central areas with rolling fields of gorgeous looking flowers and plants and to the snow-covered north. The Island of Tsushima really is a sight to behold.

With graphics and environments as good looking as they are, it’s no wonder Ghost of Tsushima has one of the best photo modes I have ever seen in a game.

There are a plethora of different options to create beautiful screenshots. You can even create animated video clips by turning on the animated environment.

The game looks so good that it is worth playing just to experience the sheer beauty and the superbly crafted environments.

Ghost of Tsushima is proof that PlayStation is the only place to play amazing, exclusive games. As an open-world action-adventure game it is near on perfect. Sure, it might not have that RPG depth, but the story, solid combat and stunning environments that are a joy to behold more than make up for it.

The only real negatives with the game where the forced stealth missions and unskippable cutscenes. There were also a few times where the screen would fade to black for some reason, this kind of took away from the immersion.

Ghost of Tsushima is an extremely fitting final PlayStation exclusive on the PS4. And it makes me feel great anticipation for what is to come on PlayStation 5.

Ghost of Tsushima - The PSF Verdict

Ghost of Tsushima is an extremely fitting final PlayStation exclusive on the PS4. And it makes me feel great anticipation for what is to come on PlayStation 5.