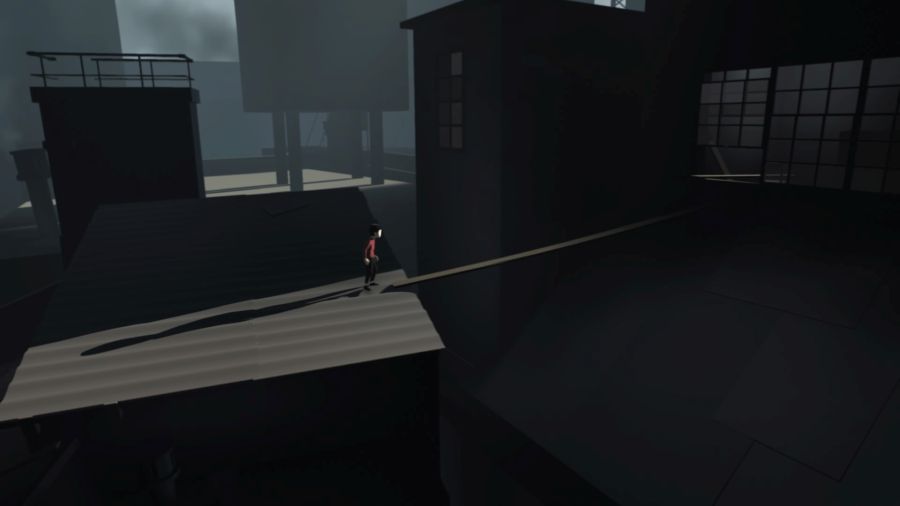 I bought inside just the other day for £6.49 in the PlayStation store totally digital summer sale. I had actually been wanting to buy it for a while, as I absolutely loved Limbo, the predecessor to Inside, I just was too stingy and didn’t want to pay the fifteen odd quid asking price at the time.

Inside was originally released in June 2016, it was developed by Playdead, the same guys who made Limbo.

In the game you play as a young boy who wears a red coloured t-shirt, one fo the very few bits of colour you see int he game as the entire game is in the same art style as Limbo, monochromatic black and white.

The graphics do look very nice, even if there isn’t much colour, it’s all very artsy.

The sound in the game is very well done also, there is a bit in the game where you activate a steam-powered wheel thing and it makes a very pleasing, rhythmic beat. The sound in the game can also cause some little funny moments and some terrifying moments like when your being chewed apart by some viscous dogs.

There are plenty of humorous, terrifying and eerie moments in Inside, like when you are being chased by an insane pig, I didn’t know whether to laugh or cry at the site of it.

You start off the game in a forest and there is shadowy guards, snarling dogs and vehicles with headlights shining, possibly trying to locate you. The game takes you on a journey through various buildings and locales and there are a few underwater parts as well.

The gameplay and puzzles in Inside are where it’s at. I thought the puzzles where absolute genius and they vary from jumping and agility type puzzles to more interactive puzzles where you have to flip switches and move items into position to try to solve the puzzle and continue on.

At the start of the game until about half way through or so I felt the puzzles where not overly complicated, they did require a bit of thinking but they did not seem too impossible, which suited me as I have played puzzle games before with puzzles that felt overly difficult and complex and in the end I just gave up.

Not with Inside though, the puzzles even the more challenging ones, made me want to keep trying to solve them.

Later on in the game I felt the puzzles did a get a bit more challenging and complex. I was trying to complete Inside without looking up any guide or YouTube videos, but alas, a couple of the puzzles later on I found myself reaching for the tablet so I could find a guide.

The puzzles where certainly varied, a few of them involved jumping up to a thing that looked like a lamp on the ceiling, doing so lets you control these zombie, mind controlled like people who you will have seen throughout the game. You then have to control these people into performing some actions like moving objects or flipping switches to open up further areas.

The end part of the game is certainly a bit weird but in a kind of humorous way. You end up breaking into a viewing tank were some of these mind controlled people have been absorbed into some hideously monstrous blob type thing called the huddle. You end up being absorbed in to this blob as well and have to control it while solving more puzzles.

The blob is certainly one of the strangest things I’ve seen in a game, it looked like something straight out of a David Chronenberg movie.

The sound effects of the blob are great, the moans, groans and grunts when the blog is moving or when it falls from a height I felt where a bit comedic and the it felt rather slapstick, but I found this to be good as it offered a bit of comic relief in an otherwise dark and gloomy atmosphere.

Inside is not the longest puzzle game, it took me about 4 – 5 hours to finish. It would have taken longer if I had bothered trying to unlock the trophies (I only unlocked 1).

The ending was a bit anti climatic I thought, it ends with you breaking the blob thing free and it rolls down a hillside and that’s it. I was kind of hoping for some closure, I wanted to know what the hell was going on, why where people being turned into mind controlled zombies?

There is an alternative ending you can unlock, I will most probably do another play through to try to unlock it.

Overall Inside was an extremely enjoyable game, fairly short but for and indie game and at only £6.49 you can’t really ask for much more.

I highly recommend Inside if you enjoy puzzle games. You can currently buy the Limbo and Inside bundle for £7.39 which is an absolute bargain as both games are fantastic.