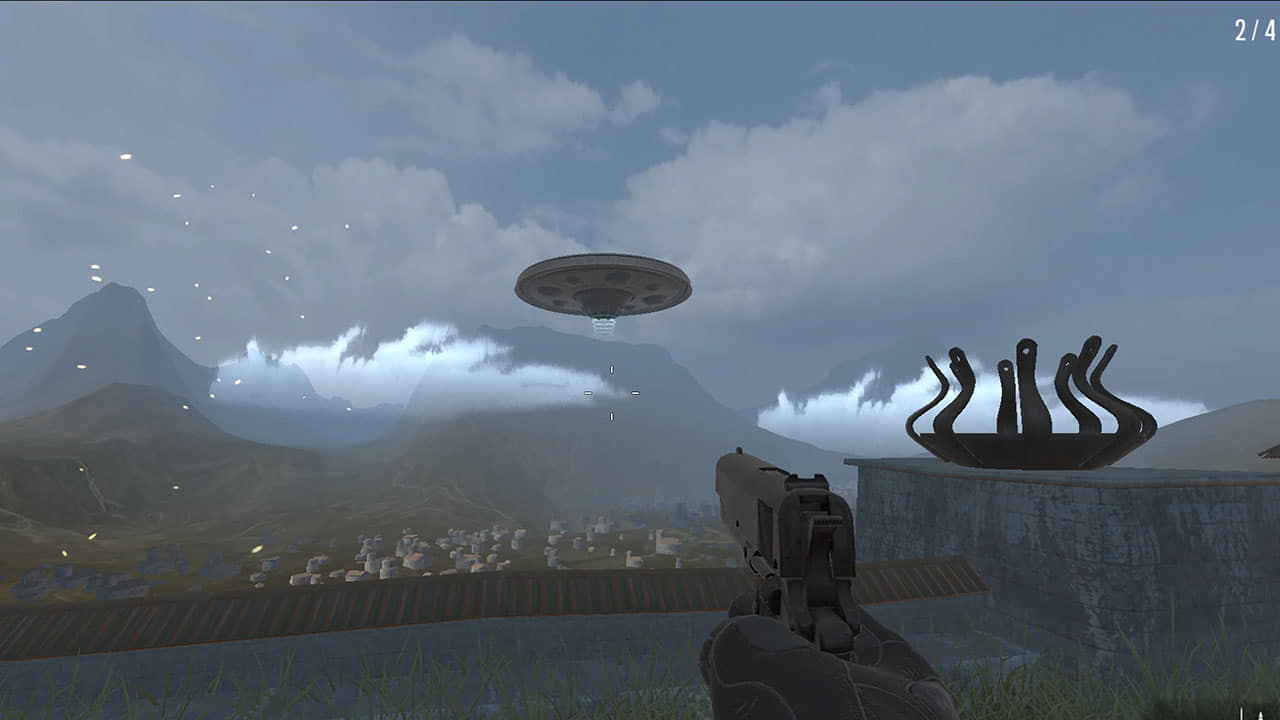 So there I was, just two hours ago sitting in front of my PS5 wondering what to play. I decided to take a look at the PlayStation Store, just in case a game had just released that could possibly have been a hidden gem. I went straight to the PS5 games section and sorted it by ‘just released.’ I looked around and saw the games I had expected to be there. Disco Elysium, Balan Wonderworld and other recently released games I was aware of. However, I was just looking for something cheap, maybe a game where I could knock out a quick platinum trophy.

Then a game caught my eye. Its icon appeared to have some weird alien writing on it. As I peered closer, I could see that the game was called, well, Aliens. I pressed X on the DualSense to get some more info on this game. It clearly wasn’t anything to do with THAT Aliens. A sequel to Alien Isolation just hadn’t appeared from thin air. Still, I was intrigued.

I saw that the game was just released today, something new to mess around with for a few hours I thought. I watched the trailer and saw that it was a first-person shooter, I remained intrigued. Clearly, the game was a low budget effort, I mean it was priced at £9.49 so I wasn’t expecting much. Nonetheless, I was impressed by the nice looking graphics of the hand holding the gun and by the reload animation. I thought the developer who made this has obviously put a bit of effort into this. I was wrong.

On reading the game’s description it said it was an FPS where you have to save the world from invading aliens basically. I like aliens, I like sci-fi and I sometimes enjoy first-person shooters. So I thought, what the hell, let’s give this a go. I mean, it probably not going to be too bad. Is it?

Willing to give the developer the benefit of the doubt and the fact that Aliens is billed as a PS5 game (it’s under the PS5 section of the PlayStation Store) I paid the £9.49 and downloaded the game.

After about ten minutes of downloading, I started the game up and was met with a basic game menu screen. 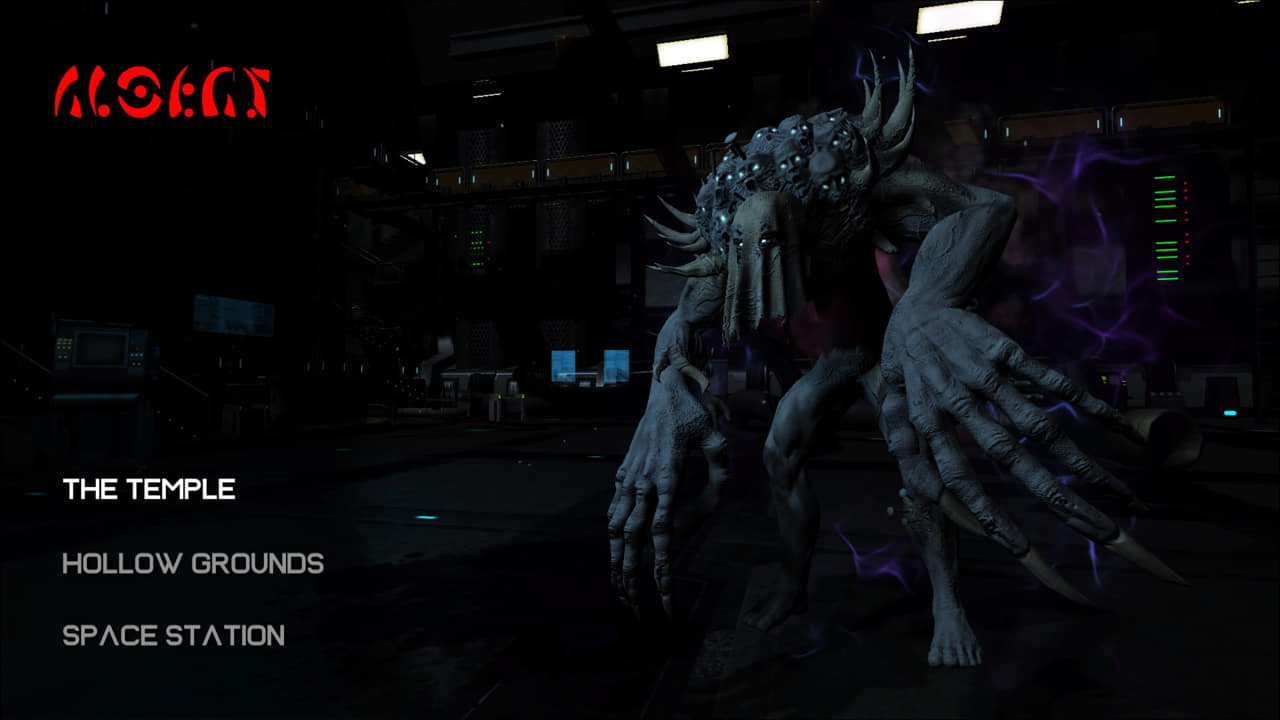 When you first boot up the game, there are two options. Start and Help. The help option just shows you the game controls, fair enough and the start option takes you to another screen to select from one of three difficulties – Rookie, Veteran or Demon. Then you get to select one of three levels (maps) – The Temple, Hollow Grounds or Space Station.

After that, you are just plopped straight into whatever map you selected and left to fend for yourself. Now, if you hadn’t read the game description you would have no idea what was going on or what you were supposed to do. The only time you get an inkling of what’s going on is when a black banner with white text appears across the screen letting you know that “Aliens are coming”.

You then hear some alien footsteps and roars before some of the aforementioned aliens come running towards you. You then need to shoot them and wait around for the next wave to appear. That is pretty much the entire game as far as I can tell. There could be more to it, but I doubt it. And I certainly wasn’t going to hang around and see. It was just that bad.

What makes this the WORST game on PS5?

The first thing you will notice when you start playing Aliens in the texture pop-in. I mean look at that shit. How on earth can this be called a PS5 game?

By my estimates, that is nearly four seconds before the buildings and other structures are loaded. That is absolutely shocking for something that is supposed to be a PS5 game.

The audio is garbage

When you first start up a game of Aliens you’ll also notice that there is no background music. The only thing you hear is the sound of your own footsteps, but sometimes the footstep sounds don’t appear and there is just nothing. Even when the “Aliens are coming” message appears there is no music. You can hear the sounds made by the aliens, growls and running footsteps but there is no music to usher in a sense of danger or urgency. 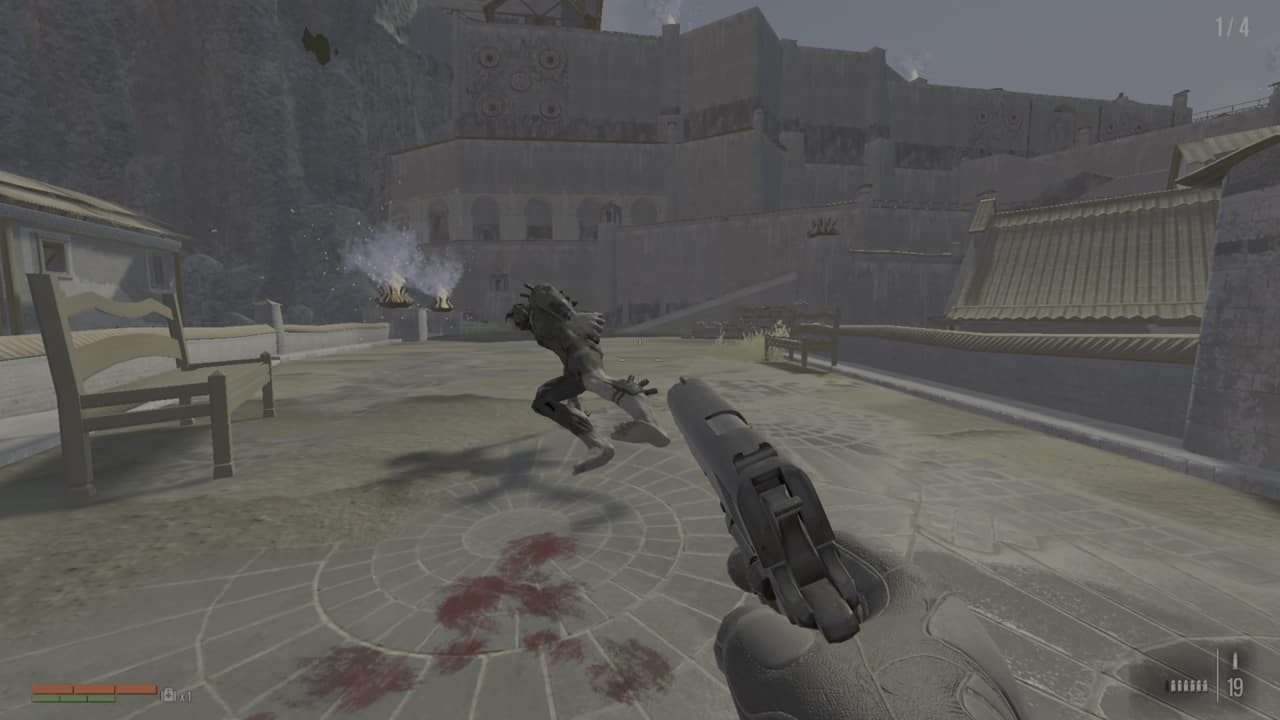 The music does eventually play, but it seems delayed and fades in AFTER the aliens start attacking you. The music is a heavy metal guitar riff, clearly chosen to be like Doom or something. But this game is not remotely close to being any sort of Doom-like game.

Once you have cleared a wave of aliens the music simply stops. Then there is nothing again. Clearly, sound design was an afterthought, in fact, I would say that no kind of thought went into this game at all. There are some other sound effects in the game, like an explosion sound and a high pitched sound if one of the aliens explodes near you but that’s about it really.

Gameplay is boring and repetitive

Granted I only played Aliens for about 30 minutes but even after five minutes, I could tell that this game just sucked. As I mentioned previously, the game is a horde mode type game where you have to kill waves of enemies. Except that it’s not really. From the text in the game menus, it appears that each difficulty level has a different number of enemy waves. Rookie has four for example.

All you do is basically just stand there and shoot your handgun at the aliens until they are dead, or you run out of bullets. You can select a knife from the weapon wheel if your bullets are depleted but it seems that later waves of enemies damage you too easily so using the knife seems akin to trying to fight a tank with well, a knife.

The game description says that you can find additional ammo and weapons. But I could not find any other weapon at all.

The gameplay, if you can even call it that is atrocious. I honestly don’t think I could play this game for another five minutes. It is truly god awful.

Are there even trophies in this game?

My hopes of getting even an easy platinum trophy were also dashed with this game. I honestly don’t even think it has trophies. That sounds absurd, right? Surely all PS4 and PS5 games MUST have trophies. Sony made trophies mandatory years ago.

It could be the fact that I didn’t play long enough to earn any trophies but there was also no trophy list for the game when I checked my trophies on the PS5. Usually, if I start up a game, even if I don’t play it or don’t play long enough to earn a trophy, the trophy list still appears in your trophy menu on the PS4 or PS5. Go and look at your trophy menu and look for a game you started but never earned a trophy. It will say 0% but the trophy list will still be there.

I thought I would check the PlayStation App to see if the trophy list showed up on there. To my surprise, it should that there was indeed no trophies available for this game.

As far as I know, that this is a first for an actual game to have no trophies. Not since Sony made trophies in games mandatory in 2009.

Yes, Aliens is probably the worst game on PS5

If I could force myself to play this game for longer I could probably find even more things wrong with this game. But even after a mere 30 minutes with this steaming pile of garbage, I think I can safely say this is the worst game on PS5 currently.

I have played some really bad games before on PS4, like Orc Slayer, but at least that had trophies and an easy platinum.

Games like Aliens, by developer Sabec Limited really do make a mockery of the PlayStation Store. PlayStation is a brand that is synonymous with quality. And although Sony’s first-party games are always of the highest quality but allowing the low-quality garbage onto the PlayStations Store just brings the whole store down a notch. But, a discussion about Sony’s quality assurance or lack thereof is probably best left for another article.

Tomorrow I will give PlayStation support a call to see if I can manage to get a refund for this absolutely abysmal game. I’m not holding out much hope though as Sony are notorious for being stingy about refunds. Unless the developer of a certain AAA Cyberpunk game publicly announces that Sony will issue refunds for said game. Then Sony seems to quite forthcoming.

I’ll post another article tomorrow to you let you know how I get on with the refund. In the meantime, for fucks sake, don’t buy Aliens.