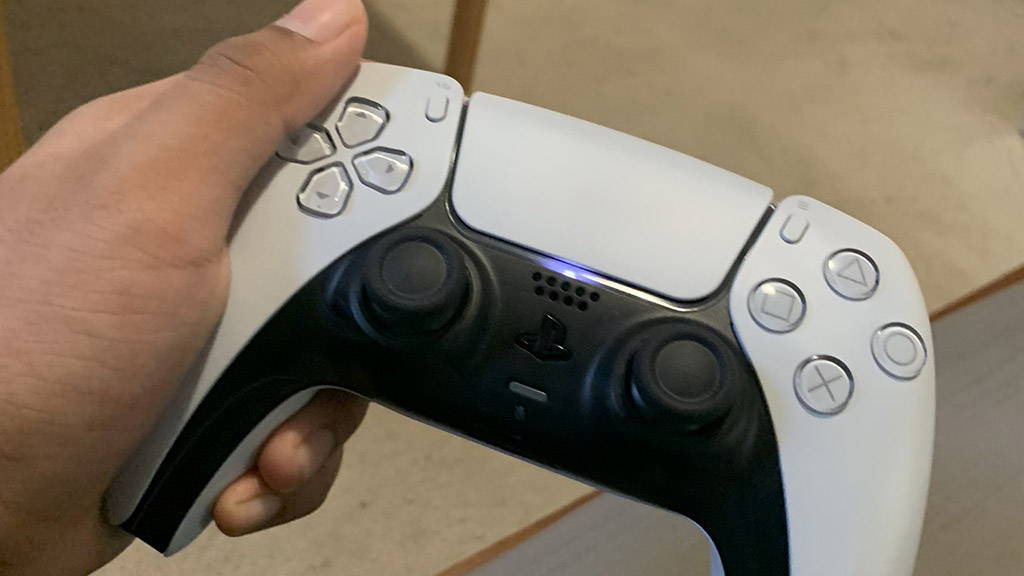 A new photo has surfaced on Twitter that purportedly shows the PS5 DualSense Controller in someone’s hand. The tweet and image by an Egyptian Twitter account called Gamezawy, was spotted by a user on the PS5 Subreddit.

The Tweet, which is in Arabic translates simply as “New image leaked for the Playstation 5 platform’s DualSense controller.”

This new image certainly looks a lot more real than the one that was doing the rounds about a week ago.

The picture above, which is supposed to show a real DualSense lying flat on the palm of someone’s hand is most certainly fake. I mean, c’mon, it doesn’t take a genius to tell the above picture has been made in Photoshop. The DualSense looks absolutely huge in it.

However, this new photo, which also alleges to show the PS5 DualSense controller in the wild does appear to be pretty real looking. I’m no forensic image expert but the photo clearly has correct shadows and lighting.

You can clearly see shadows under the person’s thumb, and shadow from the controller is covering the person’s ring and pinky finger as they grip the handles of the PS5 DualSense. You can also see the shadow made by the controller on the bench or seat that the person is sitting on.

Another thing that makes this photo look as if it could be the real deal is the light reflecting on the DualSense. You can clearly see light from a light source reflecting on the part just under the touchpad and on the buttons.

The DualSense also looks like a normal size int his photo, unlike the other “leaked” photo which made the controller look huge.

Without the verification of some kind of image expert, it really is difficult to tell if this “leak” is real or fake. But it looks pretty damn real to me. What is also very real is the person taking the photo really needs to put some socks on.

And there you have it. Could this be the first picture of an actual PS5 DualSense controller outside of Sony’s product shots? Or is it just a really good Photoshop job?

If this person really does have a DualSense, therefore they might also have a PS5. What I want to know is, why didn’t they take a photo of the back of the PS5? Or they could have done a console size comparison with  PS4 or a banana. That would have been much more interesting.

What do you think? Is the photo real or fake? Let me know in the comments below.