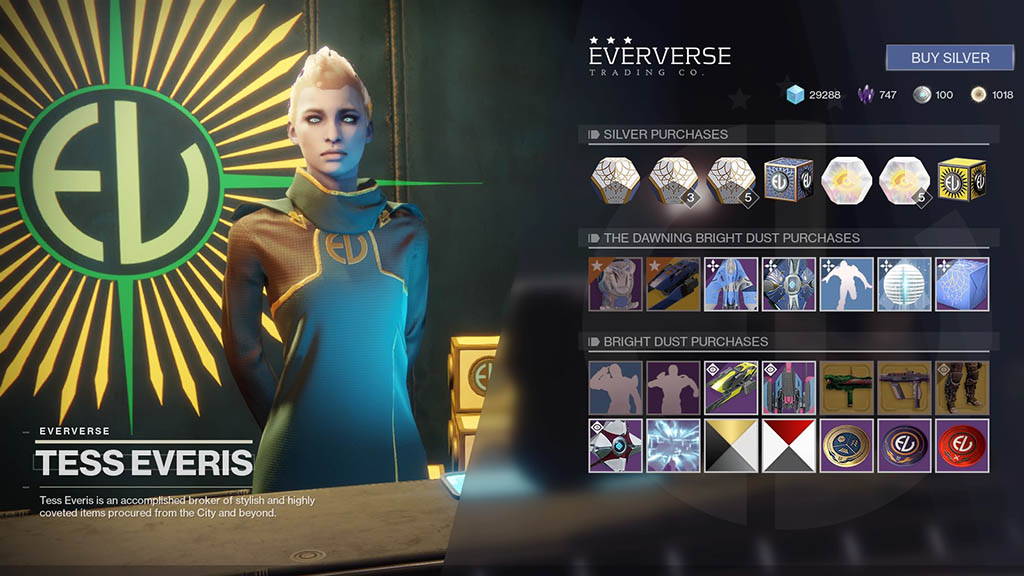 Poor Tess Everis has been getting it tight recently as Destiny fans took to Reddit and the Bungie forums to vent their anger over the Eververse store and Destiny 2’s loot box economy.

Destiny players have been angry about Eververse since Destiny 2’s launch, mainly due to the fact that some if not all of the best looking cosmetic items such as ships, sparrows, shaders and ghost shells were locked behind Bungies Bright Engrams instead of being rewards for completing end game content like raids with some Destiny players re-naming the Destiny 2 endgame the “spendgame.”

Some of the items that were added with the Dawning where really, really cool looking too, like the armour set below. There was also exotic ghost shells and exotic sparrows and some really great looking shaders. From what I can gather, what really pissed people off was a lot of the best looking items where not in the Dawning engram loot pool, engrams you would get for completing certain activities in the dawning and the Dawning engrams had a hard cap so you could only earn a set amount.

The hatred for Eververse and poor ol’ Tess Everis was certainly getting rather bad with popular games website Destructoid calling the Dawning event ‘Pure Greed’.

Bungie have sought to quell the flames a bit though as Christopher Barrett, Destiny 2’s Game Director has just recently tweeted that new themed ships, sparrows, Ghosts and shaders will be added to the loot pools of the upcoming Iron banner and Faction Rally events.

So good news then? Perhaps. It seems a bit like a token gesture on Bungies part to calm down the furore surrounding Eververse and the “spendgame” but at least they have acknowledged our anger regarding Eververse and we shall need to wait until the new year to see what path they plan to take going forward.

Also some good news on the vault size front, another hot button topic in the Destiny community right now with many players unable to store there collected items due to limited vault space. Looks like Bungie have some short-term and long-term solutions that will hopefully help with the vault space issues.

Destiny 2 is not in a great spot right now, with recent controversies over XP gains, the lack of endgame, a very short and not particularly great Curse of Osiris DLC and the continued anger over Eververse and loot boxes it would appear that Bungie have their work cut out for them if they want to improve Destiny 2 and appease the ever dwindling player base.

It’s sad but true that Destiny 2 just doesn’t have that special something that kept many people playing for thousands of hours. I’m sure Bungie will try their hardest to fix the game and add content and quality of life improvements as time goes on, but should we really have to wait another 2 – 3 years before the game reaches its full potential? We waited that long before Destiny 1 really became amazing, should we have to wait that long again?