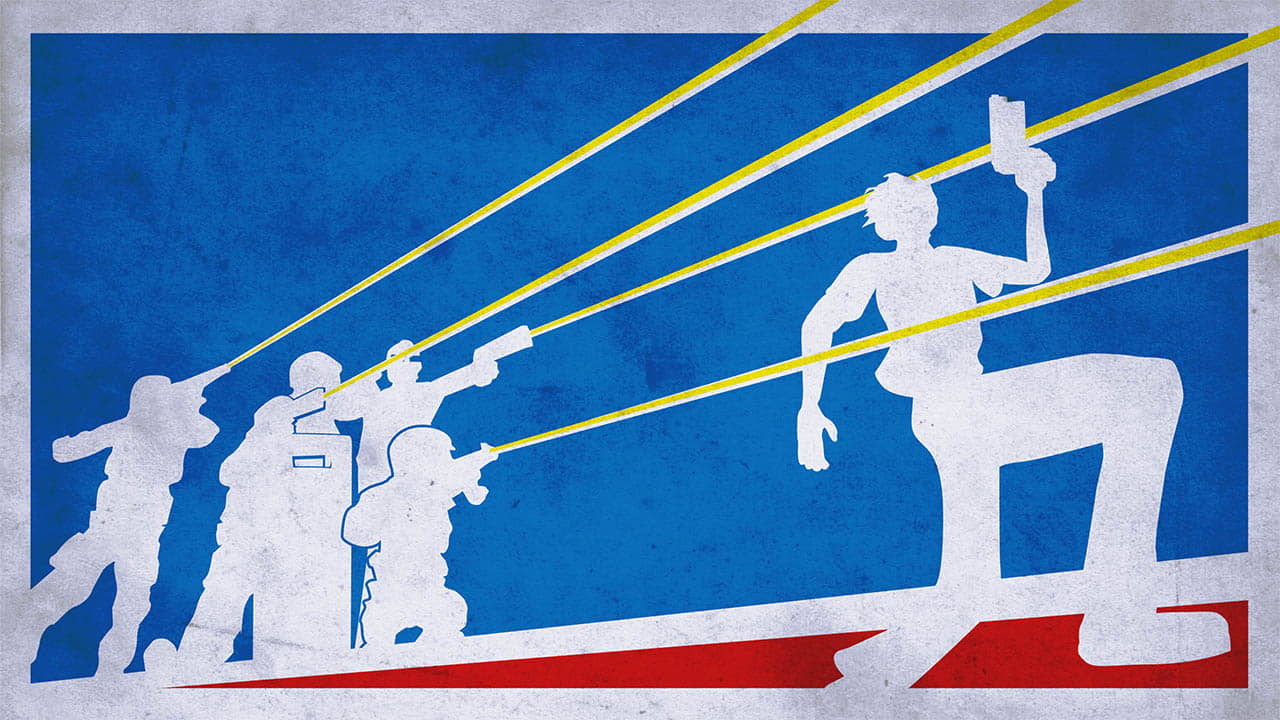 If you’ve ever seen any of The Fast and The Furious or The Transporter films, or indeed any action film, then you’ll have a good idea of what Speed Limit is all about. In short, Speed Limit for PS4, from developers Gamechuck, is a fast-paced, high-octane, arcade action game that smashes genres together to create a challenging and rewarding action-packed thrill ride of a game. 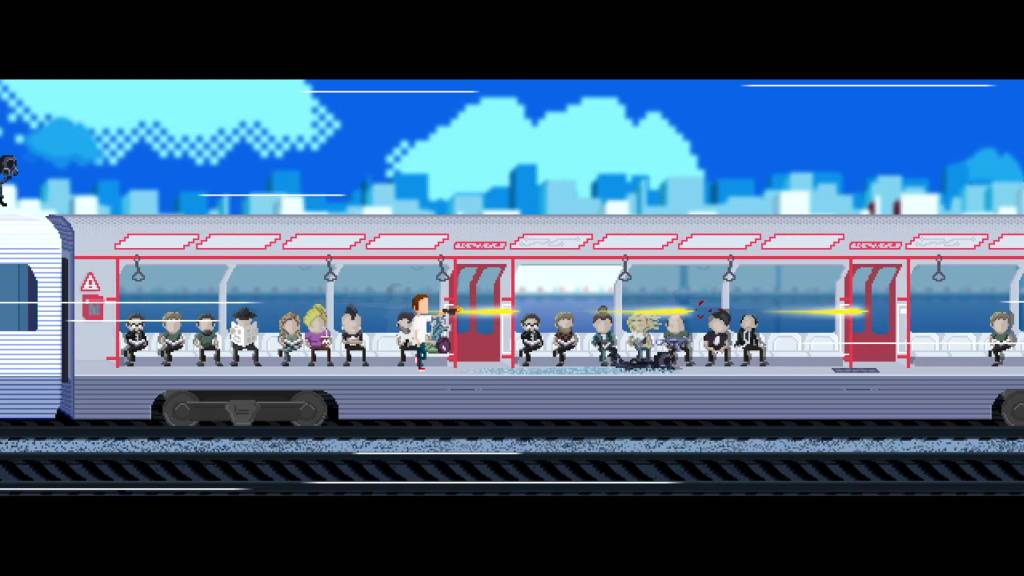 If you like old-school games then you’ll probably like Speed Limit. The game is presented in a pixel art style that is reminiscent of games when I first started gaming on the Amiga 500. Younger gamers might balk at a game that doesn’t have mo-capped animations, or realistic 4K graphics. But, a game doesn’t need to look like the GDP of a small country was spent on development to be good. 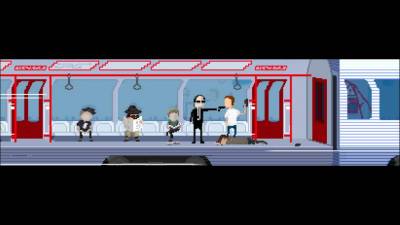 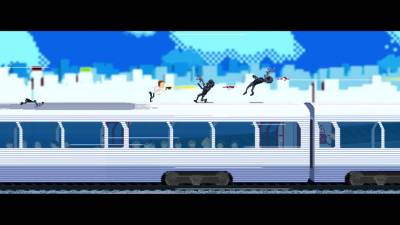 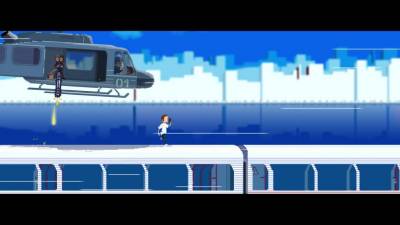 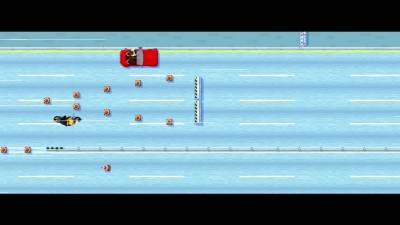 When it comes to old-school, action, fun, and playability Speed Limit has these things in abundance.

Let me make one thing clear. Speed Limit is not an easy game. Although there are a total of 33 trophies including a platinum trophy, this is not quick or easy platinum by any means. The game is definitely difficult, and you will die a lot and I mean A LOT. But unlike other challenging games, I have played, I never felt Speed Limit to be frustrating.

If you can learn from your mistakes and learn the game, then it does get a bit easier. But, just when you think you’ve got the hang of the game it throws you a curveball. Where Speed Limit really starts to ramp it up, both in action and difficulty is with its genre-warping, perspective-shifting gameplay. 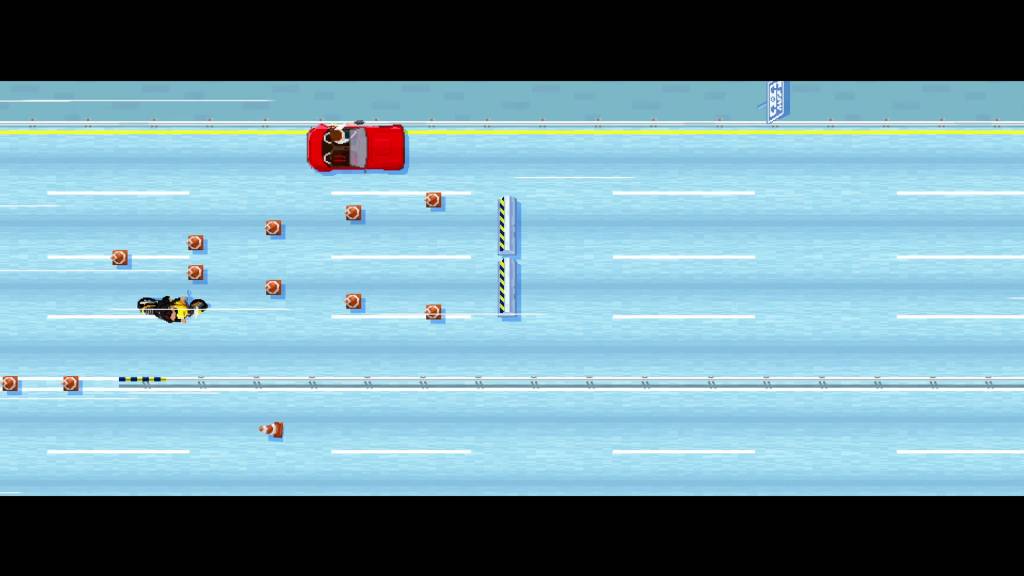 You start off on a train, just minding your own business when a disheveled-looking man hands you a gun and collapses in front of you. It’s from that moment on that you are thrust into Speed Limit’s action-packed, adrenaline-fueled gameplay. You go from sprinting through train carriage while cops chase you and try to shoot you. Then you jump on top of the train and have to fight off even more cops and a helicopter. 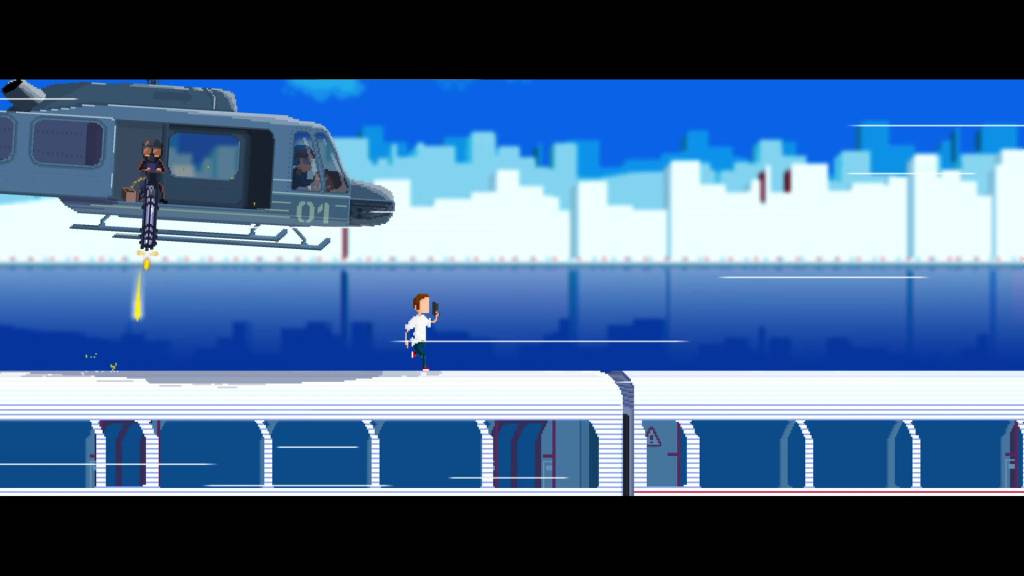 All of this while jumping over gaps in the carriages and trying not to get your head taken off by the overhead lines. Did I mention you also have to outrun a helicopter? 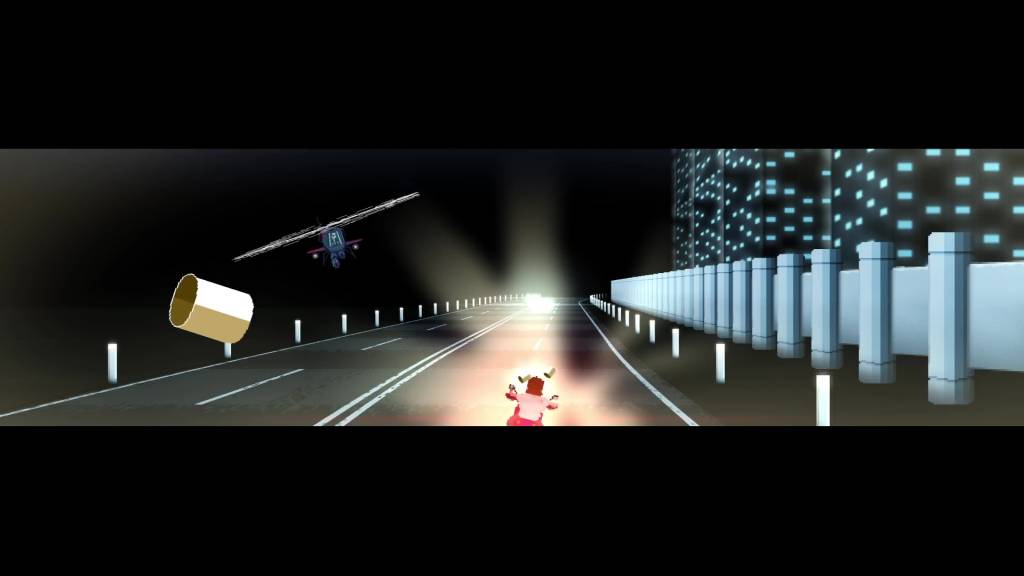 Speed Limit – a change of perspective

Just when you think you’ve finished that level, you jump down into a moving car and are taken from side-scrolling shooter to top-down, side-scrolling racer, where you have to outrun more cops. The great thing about the perspective-switching gameplay is that it is all done seamlessly. There are no loading screens at all (even on PS4.) The seamless transitions from one perspective to another really help you stay in the action and adds to the overall immersion.

The transitions from one perspective to another also work really well with Speed Limits genre-hopping design. There are about six different genres throughout the game and each is as fast-paced and action-packed as the last. One of my favorite bits from the game was speeding along on a motorbike (Road Rash style) while flying off of ramps to shoot at a helicopter. Then at the end of the scene, you jump your bike off another ramp and dive headfirst straight into the helicopter. Then another seamless transition into a diagonally-scrolling helicopter shoot-em-up. 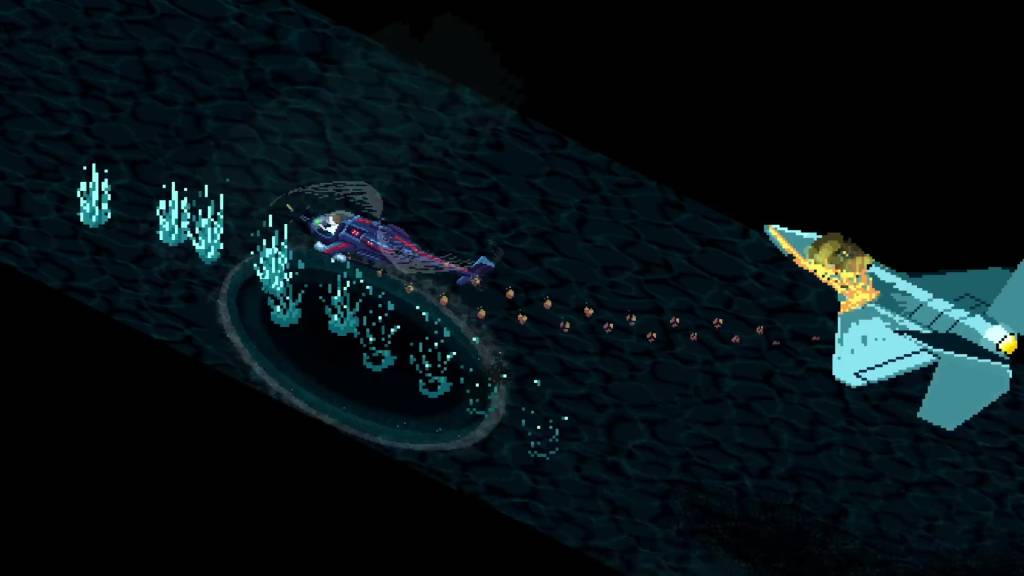 Once you have avoided being shot down by fighter jets, it’s another flawless jump into your own fighter jet.

As I previously mentioned, Speed Limit is no walk in the park. But even if you don’t want the challenge that the game offers, there’s still lots of replayability value. Gamechuck has recently added an arcade mode to the game, that lets you test your skills and penchant for high-octane action. Compete to get a high score and have your name adorn the leaderboards.

If you like hunting for trophies, then Speed Limit has 33 in total, including the coveted platinum. It is pretty difficult platinum to get and I have not yet achieved this lofty goal, but I will. According to PlayStation Trophies, the platinum will take around 10 – 15 hours. That’s a decent amount of gameplay for a game that costs less than £10/£10. 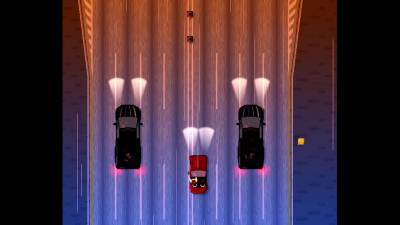 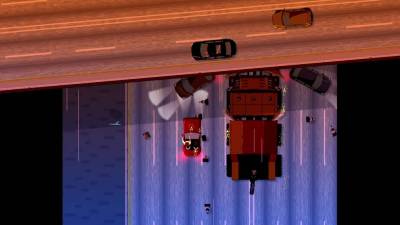 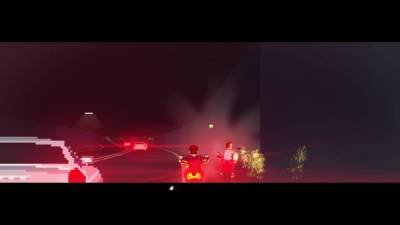 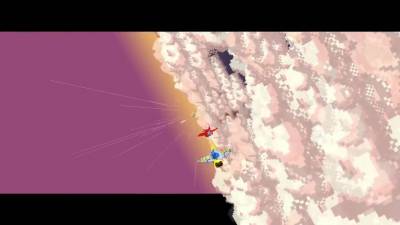 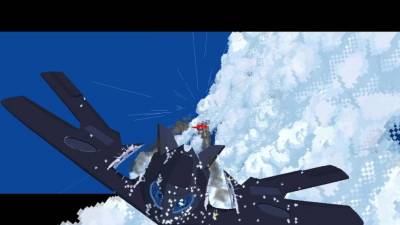 Speed Limit, for what it is, is a seriously fun game. And that all that matters. Games should be fun and playable and Speed Limit is both.

The only negative experience I really had with the game was a couple of crashes on PS5 and one on PS4. But I don’t think it had anything to with the compatibility of the game with PS5. Anyway, after dying umpteen times as I was just eager to get back into the game so I could progress to the next chapter. The game crashing was the least of my worries, my lack of skill was more concerning.

If you like old-school games that are filled to the brim with fast-paced action then you’ll like Speed Limit. Its biggest strength for me was the genre-shifting and persopective-switching. It made me feel like I was playing about six games in one. And the seamless transitions between each chapter really helped keep the action and the momentum going.

For its low price, its fast-past gameplay, and its high replayability value Speed Limit is a must-buy for anyone who loves action games that provide a satisfying, fight, die, repeat kind of challenge.

Speed Limit is currently on sale on the PlayStation Store and is priced at $6.99/£5.59. Speed Limit is a PS4 game but is playable on PS5 via Backward Cmpatability.

Review code provided by the developer.

Speed Limit, for what it is, is a seriously fun game. And that all that matters. Games should be fun and playable and Speed Limit is both. 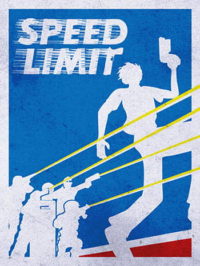