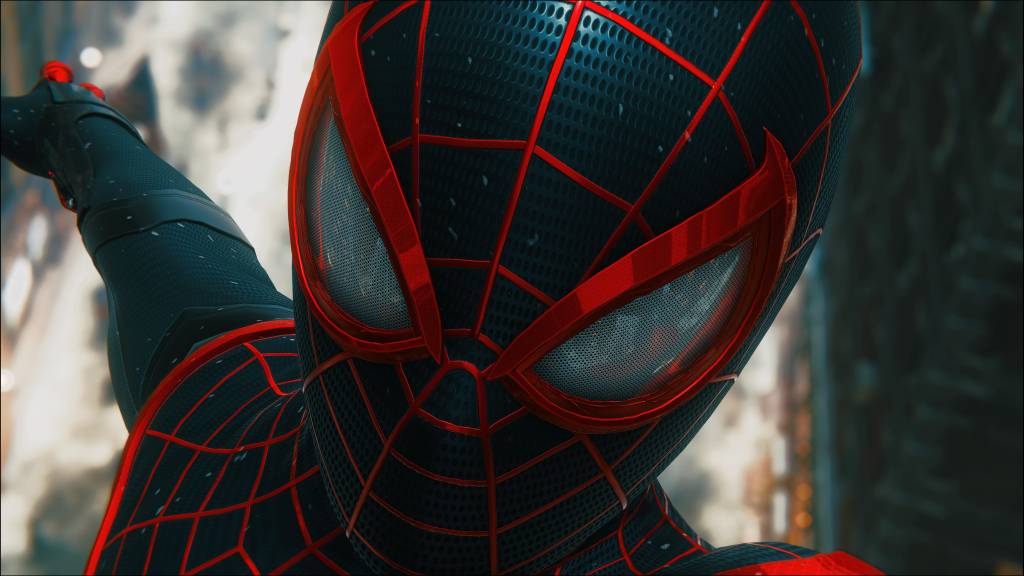 Insomniacs 2018 Spider-Man game for the PS4 was a clear hit with PlayStation gamers. Not too much has changed with their latest offering. Spider-Man: Miles Morales has been given some polish on the PS5 version, some new powers have introduced and of course there’s a new hero in town with Miles Morales taking the starring role as Spider-man.

If you’ve played the 2018 Spider-Man game then you’ll immediately be in familiar territory. The new game takes place in New York City and you are placed in Mile’s shoes pretty much right off the bat.

Immediately you’ll get a feel for the web-swinging around New York. This will be pretty much familiar to you if you have played the previous game, although with Mile’s being somewhat a Spier-Man in training, his swinging is a bit more clumsy and not quite as elegant as Peter Parker’s. A bit like someone learning how to Ballet dance for the first time. 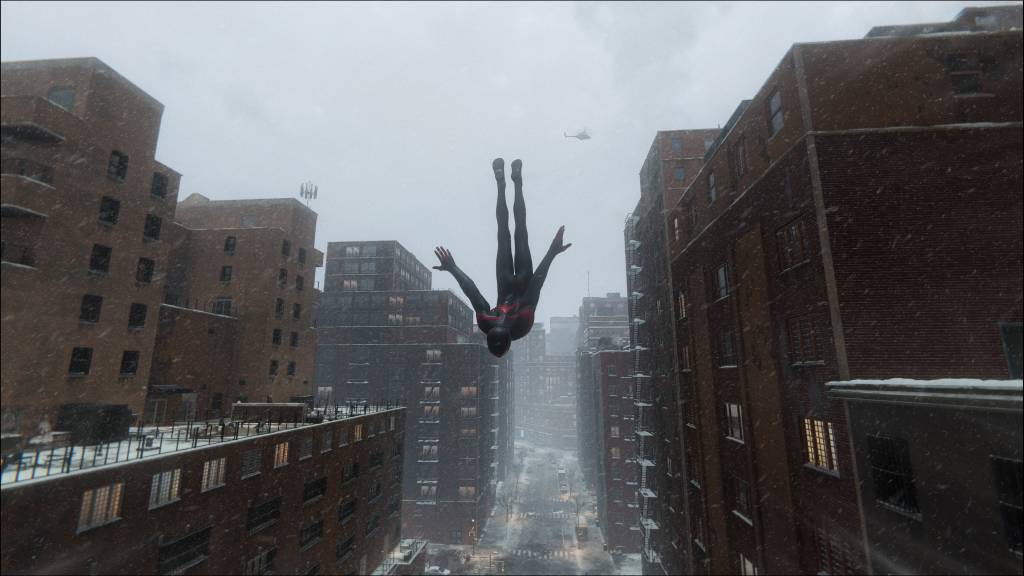 Not a great deal has changed in the web-swinging department. Which is good. Because swinging about New York City as Spider-Man is possibly one of the best things you can do in a video game. Swinging around is still fast, fluid and fucking fun.

The game gives you a short introduction to the swinging and traversal mechanics as Miles makes his way to meet Peter. Seems like Rhino has escaped from a prison convoy and the dynamic duo need to take care of business. Like Spider-Men do.

Once you have made your way through the adrenaline-fuelled opening mission then the game really starts to open up. Peter (Spider-Man number one) has to go away with MJ for a while leaving his protege Miles in charge of kicking ass in New York City. 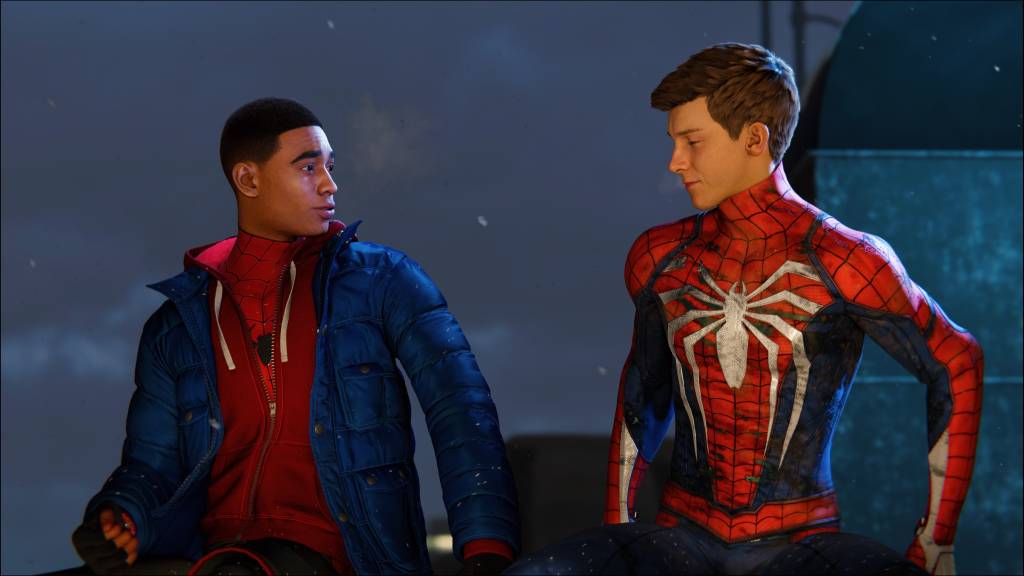 A New Hero In Town

From here on in Spider-Man: Miles Morales is pretty much your standard super-hero fare. But, it is executed with perfection. There’s the usual Corrupt corporations, low life criminals, private armies and powerful baddies for Miles to deal with. And boy does he deal with them in style. 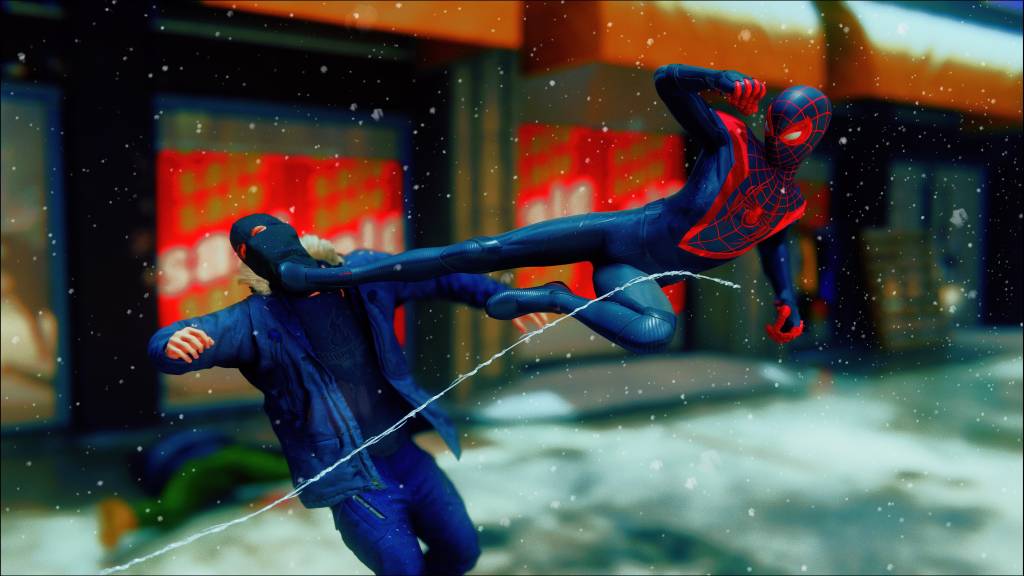 Along with the web-swinging, the combat in Spider-Man: Morales is undoubtedly one of the games strongest features. Fighting the various baddies and bosses is just pure button-mashing mayhem and fun.

The combat is pretty much similar to the first game with Miles having an array of different moves and attacks at his disposal. The introduction of the Venom powers to the game was a great decision by Insomniac as it adds an extra depth to the combat and gives you more awesome looking options for disposing of enemies. 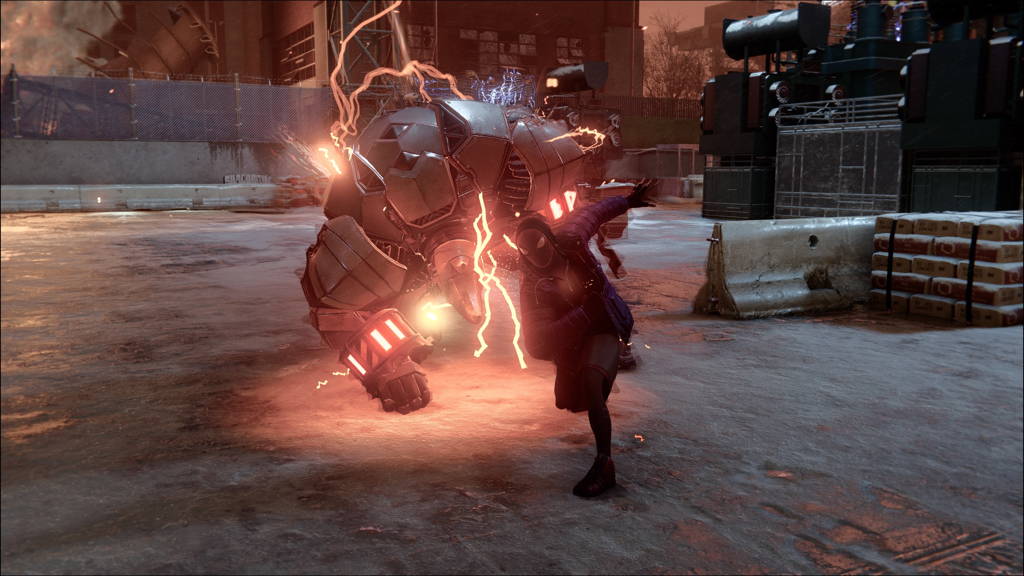 A PlayStation exclusive single-player game would;t be complete without a great story and Spider-Man: Miles Morales has a pretty decent one. Although the story is the usual super-hero narrative it is well written and there’s plenty of drama with the odd bit of emotion-wrenching scenes thrown in for good measure.

The story takes place about a year after the first game. Miles has been training with Peter Parker and is getting used to his new responsibilities as Spider-man number two.

If you haven’t played the first game, don’t worry, you can watch the re-cap before you start the game. 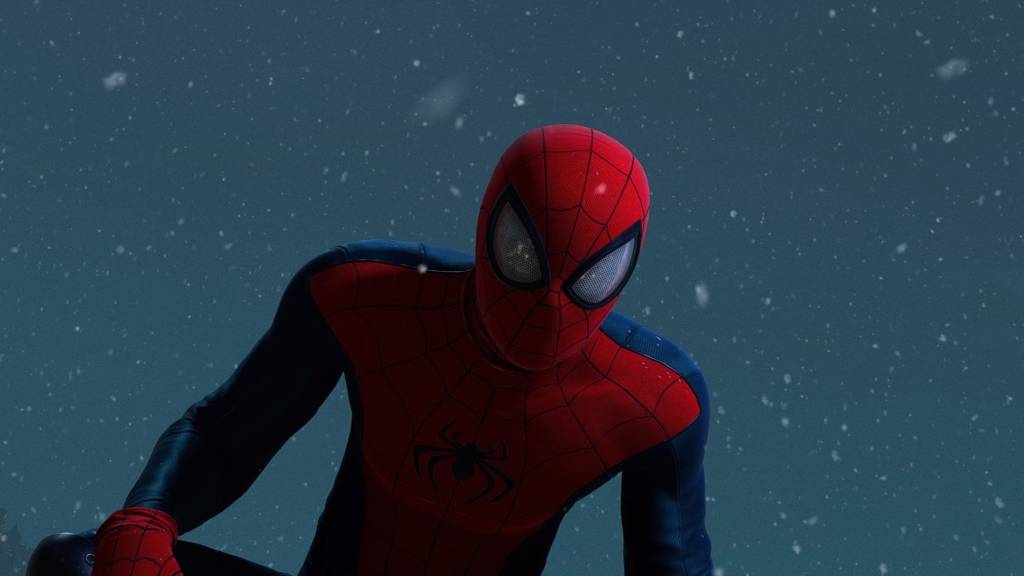 To me, the story was about Miles getting thrown into the deep end when he takes over for Peter. It’s about Miles finding out who he really is not just as Spider-Man but as himself.

In amongst the super-corporations up to no good (Roxxon) storylines, the game also throws a bit of emotional turmoil into the mix as Miles has to deal with his estranged Uncle, who is a thief with superpowers too. There’s also a long-time friend of Miles who turns out to be Spider-Man’s arch-nemesis in the game.

Although the story and the game are much shorter than Spider-man 2018 it definitely gets you invested in the game and isn’t simply there to kill time between beating up the bad guys. 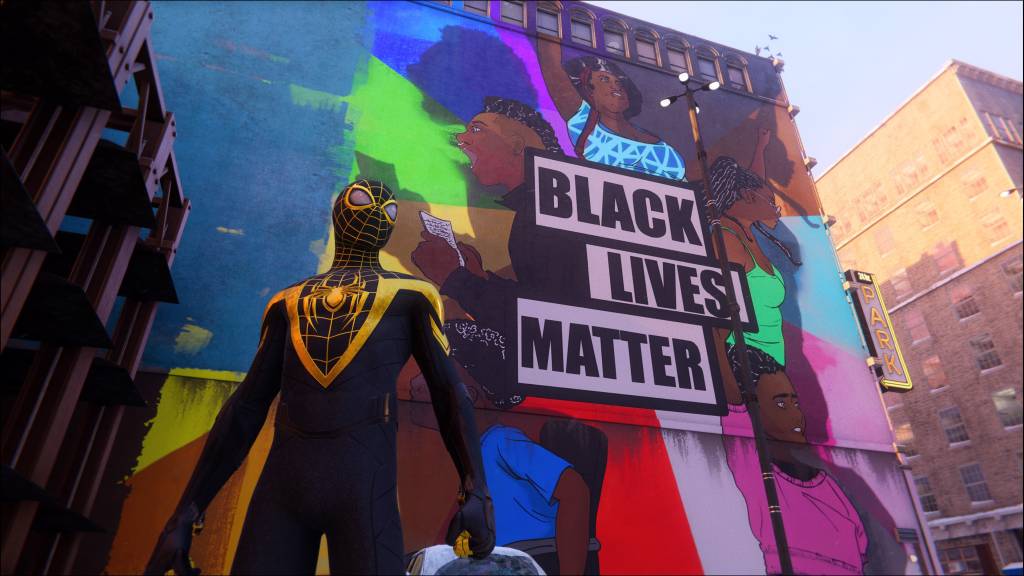 A Spider-Mans Work Is Never Done

Outside of the main story missions, there’s plenty to do in Spider-Man: Miles Morales. Like the first game, there are plenty of side missions you can do to help out the people of New York City.

The random crimes that pop-up also makes a return from the first game. Ensuring you’re never too far from giving more bad guys an ass-kicking.

Side missions can be selected from the in-game app which Miles’ friend Ganke has made to help Miles keep track of who needs help in NYC. 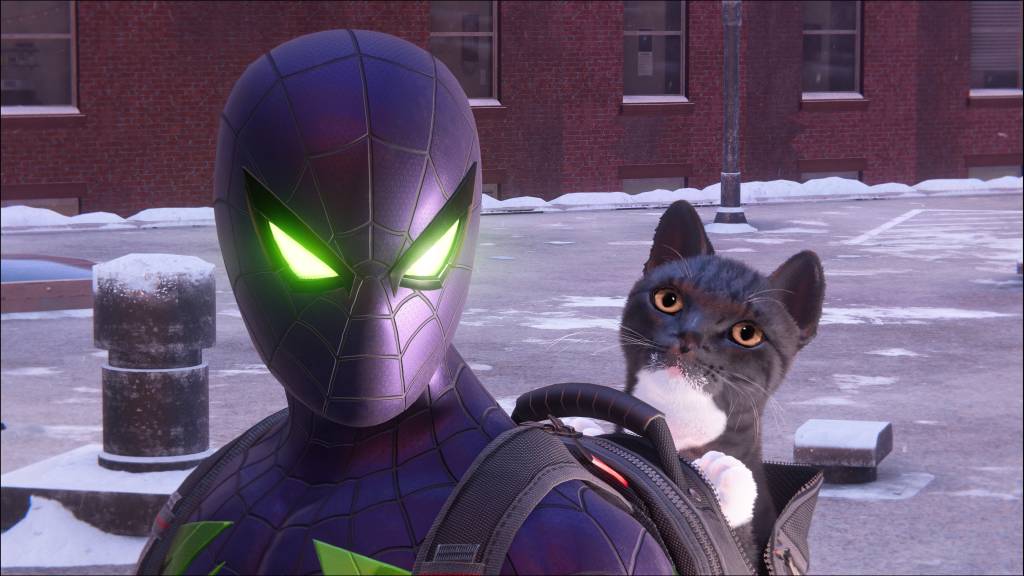 In my Spider-Man: Miles Morales PS5 review, I think it’s also fitting to mention the rather excellent photo mode that Insomniac has created for the game.

As well as the usual plethora of options that most photo modes have, Insomniac has also added in a lighting mode which lets you place new light sources in the scene. This makes for some very striking screenshots.

The photo mode in Spider-Man: Miles Morales is pretty damn good with a host of different options including the aforementioned lighting. You could literally spend hours in photo mode crafting the perfect screenshots and it almost rivals the amazing Ghost of Tsushima photo mode. 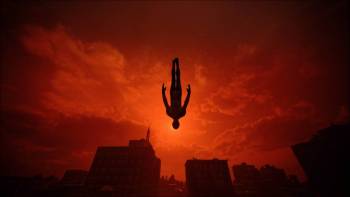 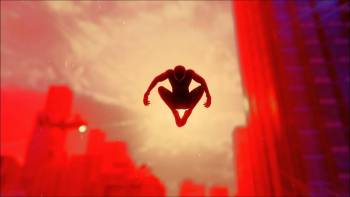 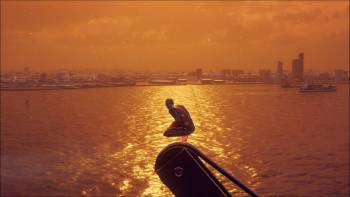 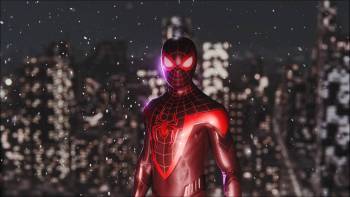 Check out the Ray-Tracing on that

It’s not only in photo mode that Spider-Man: Miles Morales shines with stunning visuals. The entire game is just a sight to behold. New York City looks even better than it did in 2018 and of course, the PS5 version of the game is brought to life with Ray-Tracing and graphics which are a visual delight. 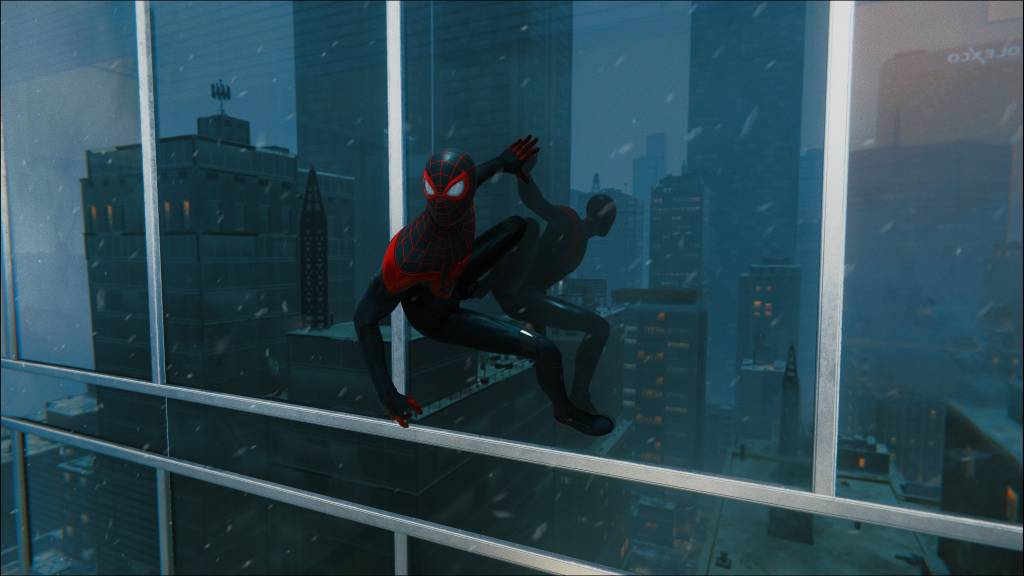 The PS5 certainly has no shortage of cracking launch games and Spider-Man: Miles Morales is at the top fo that list. It’s a game that is both familiar and fresh with fantastic button-pounding combat and a captivating story to keep you engaged ’til the very end.

Sure it might be a bit too short and maybe a bit too woke for some people but it’s a fantastic game which gives you a look into the future of what PS5 can do and what other amazing games it will give us in the years ahead. 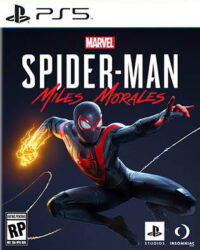