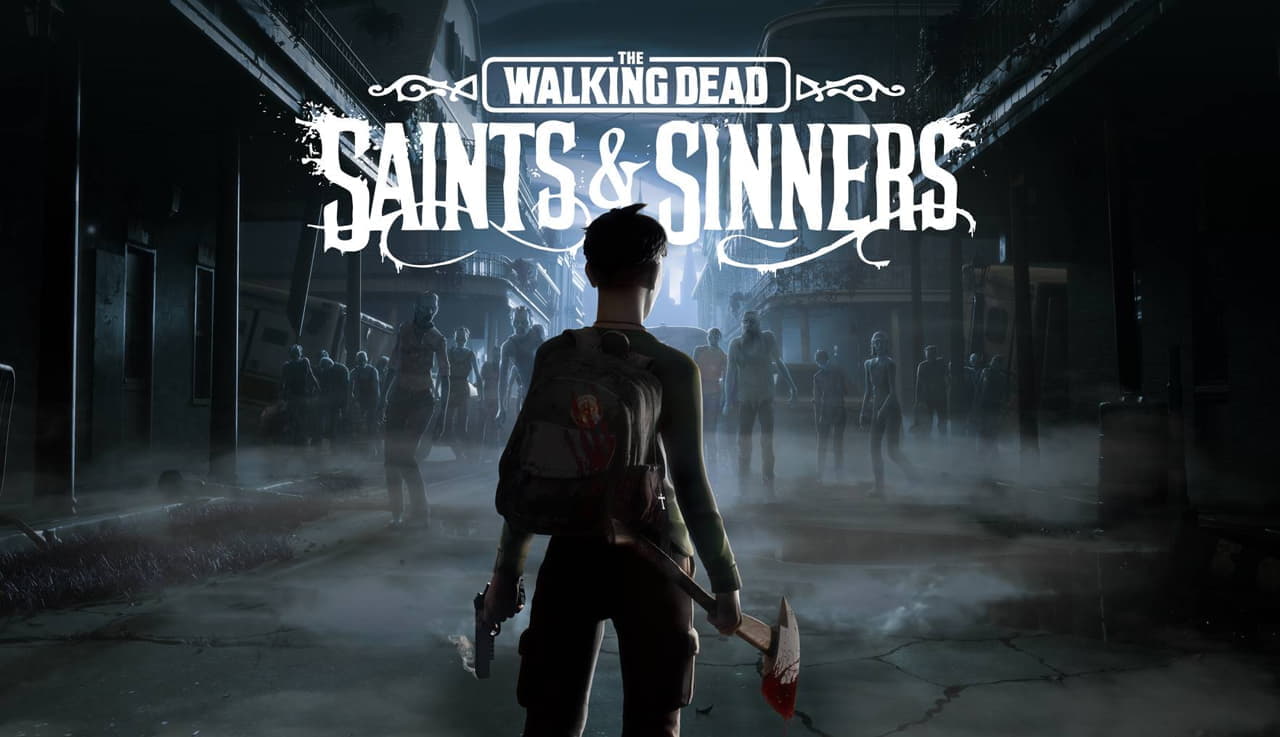 I got really into The Walking Dead TV show probably around the middle of last year. And although I had heard of The Walking Dead Saints & Sinners VR game, which was released in May 2020, it was never really on my radar for playing. But, after getting deeply engrossed in the TV show and then seeing that Saints & Sinners was free with PS Plus starting in November last year, I thought I would give it a try.

I started playing The Walking Dead: Saints & Sinners over the Christmas holidays and man, am I glad I added it to my library. Although Saints & Sinners hasn;t really got anything to do with the TV show (it’s canon to the comics apparently) it turned out to be one of the best PS VR games I have ever played. 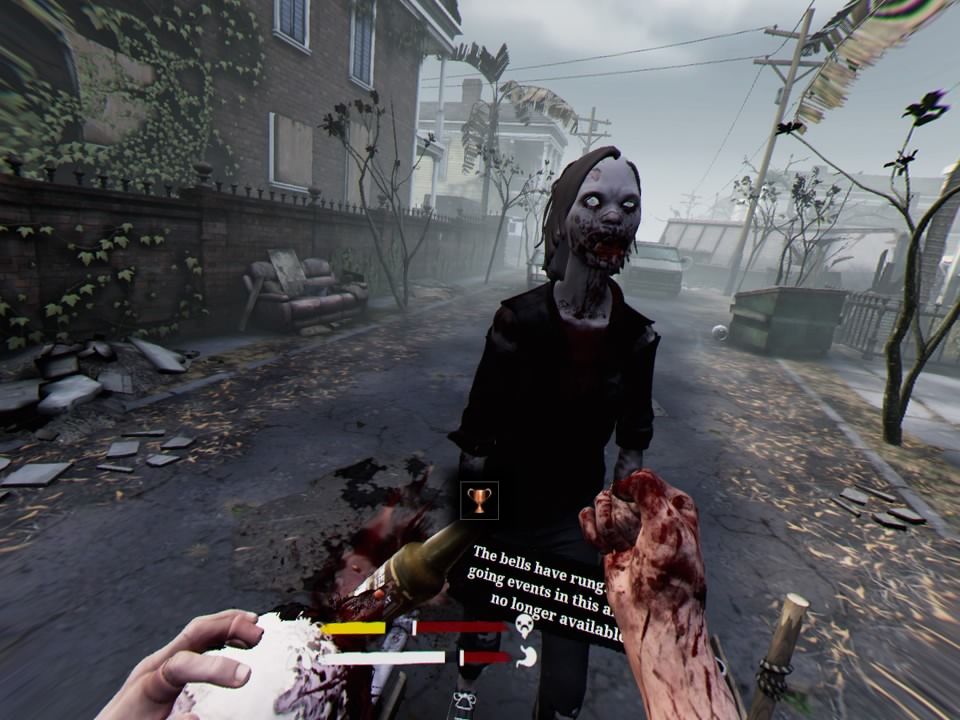 In The Walking Dead: Saints & Sinners you play as The Tourist. A tough as nails survivor of the Zombie Apocolypse. After the tutorial to get you acquainted with the game mechanics, you are thrown into the game and you have to use your wits, crafting and survival skills to survive the post-apocalyptical Walker nightmare of New Orleans. 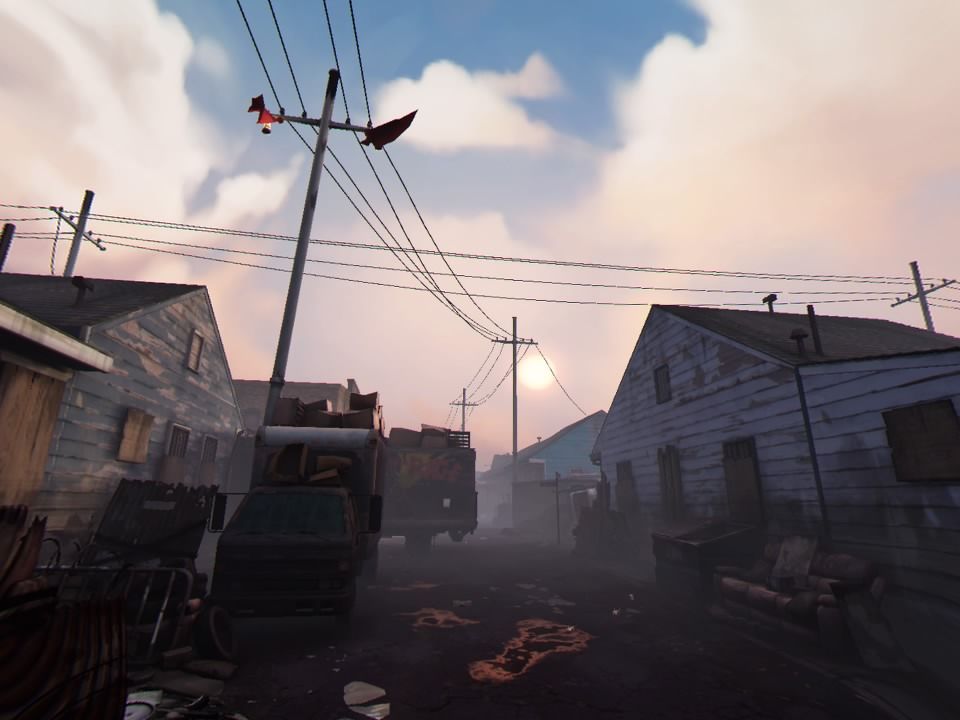 At the start of the game, you meet up with an old guy called Henri, who gives you the skinny on what’s happening in New Orleans. Henri directs you towards his hideout, which is in a graveyard.

As The Tourist heads for Henri’s hideout, you are confronted by how scary the game is and how even scarier it will become. Walking through a dark, mist-filled graveyard had my heart racing. Armed only with a simple knife, a screwdriver and a rusty revolver I was unsure how I would fair against the undead with such a meagre arsenal of weapons. 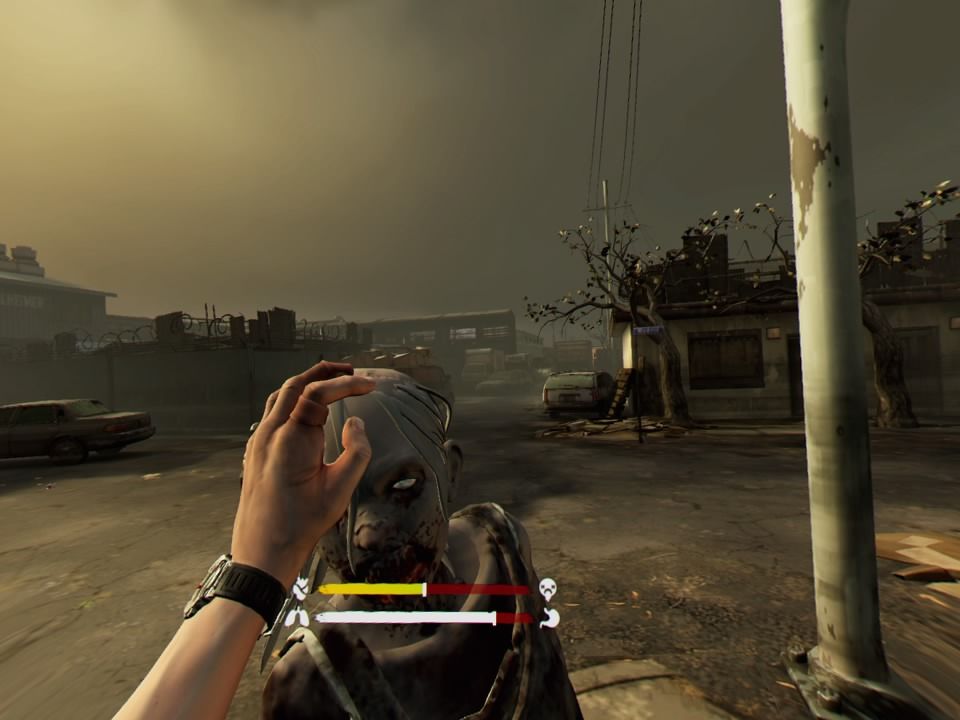 Thankfully, the start of the game is pretty light on the Walker front. But as the game progresses be prepared to endure pant-shittlingly scary moments.

The Walking Dead Saints & Sinners features two main questlines once you get into the game proper. A very early mission has you travel to find parts for a radio which is located in Henri’s bus hideout (now your hideout). It’s a pretty easy mission but it gets you used to dealing with Walkers and Human enemies.

The other main missions revolve around you gathering intel for a fellow survivor named May and helping out a soldier who is locked in the place that you ultimately need to reach – The Reserve.

I found the missions to be pretty similar in nature. Essentially you have to travel to an area of New Orleans, locate something and then bring it back. In the case of the soldier trapped in The Reserve, you have to locate parts of a pump system, take them back to calibrate the pump then install the pump in another location. 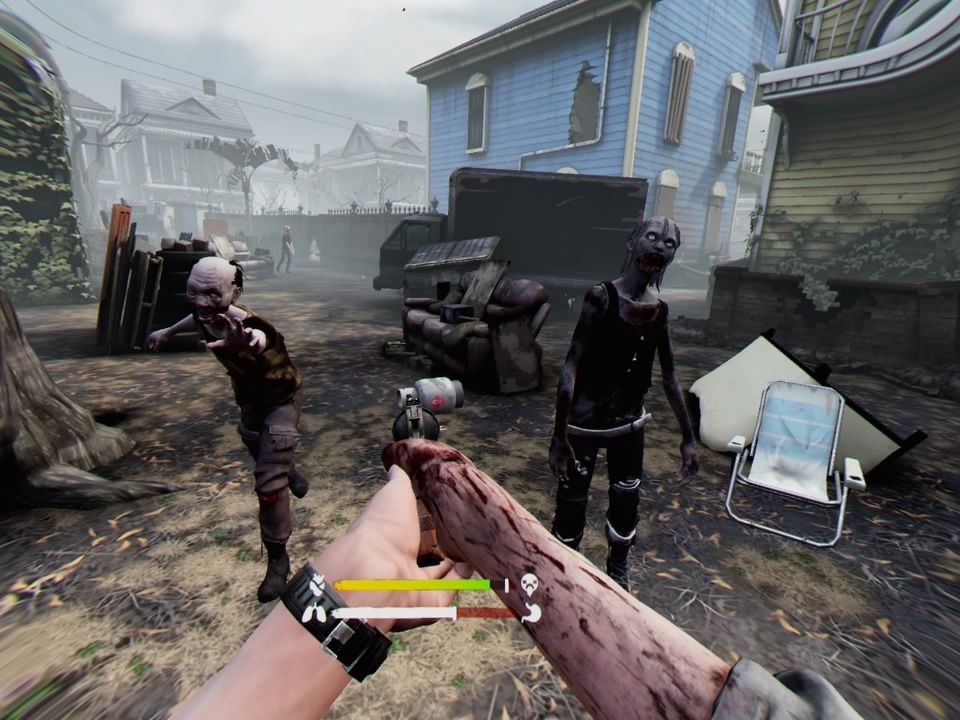 The Walking Dead is set in a flooded New Orleans which is teeming with undead enemies as well as alive enemies. There are nine different locations you will need to travel to during the game. The locations are self-contained maps that are either residential areas with houses or commercial and industrial areas with workshops and factories.

Some of the locations are fairly small and some are a bit bigger but I found them to be well designed and atmospheric. Even though the locations aren’t particularly huge, early on when you first arrive at a location, they can be quite daunting to explore. Especially as the threat of Walkers or living enemies looms around every corner.

You do have a map that you can access by pulling out your journal and it;s very handy for finding your way around the locations.

My only gripe with the locations of The Walking Dead: Saints & Sinners is that I wish more buildings had been accessible. Only certain houses and buildings are explorable. The game also features some traversal mechanics like being able to climb over walls, climb up drainpipes and hop over cars. Again though, I wish more of the environment could be traversable in this way. 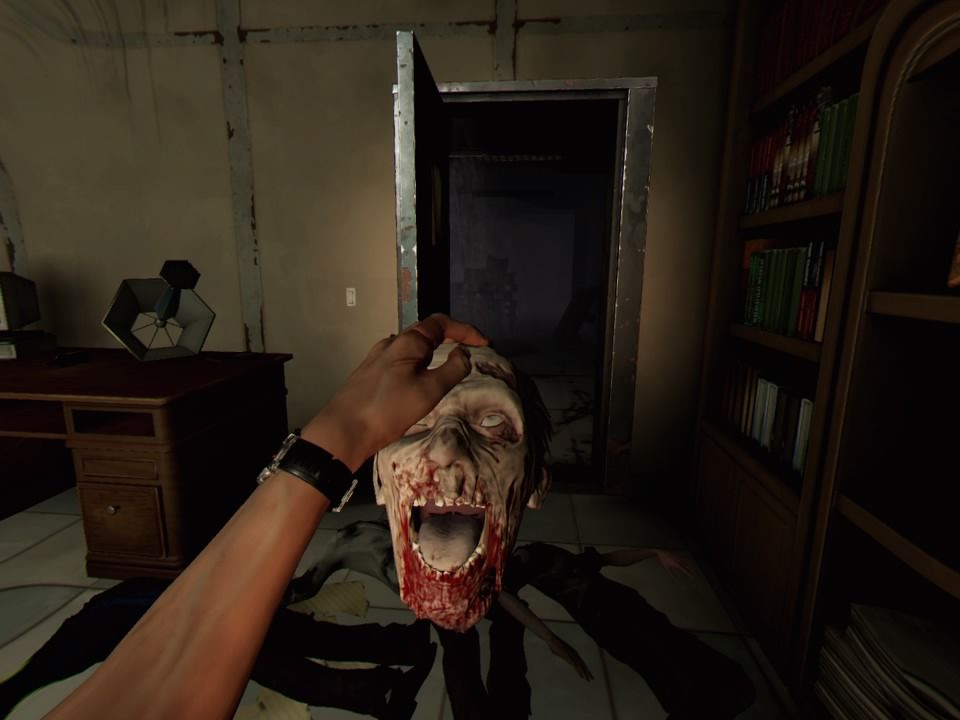 More than one way to kill a Walker

Where The Walking Dead shines is in the variety of ways you can kill Walkers and human enemies. Early on in the game, you might only have a basic shiv or a knife to brain the Walkers. As you progress through the story and collect crafting materials, you will find more weapons. You will also be able to craft other weapons as you upgrade the crafting tables at your hideout.

Crafting weapons is the key to survival in Saints & Sinners. Scavenged weapons are not very durable and will break after a short time. Crafted weapons last a lot longer.

As you explore the various locales of New Orleans, there are plenty of items you can use as makeshift weapons. You can use broken bottles, spoons and various other things to dispatch Walkers and living enemies. I actually didn’t realise you could use things like broken bottles to kill Walkers until I was about 3 hours into the game.

There are also a few different guns like pistols, shotguns and rifles that you can get. But these create noise which attracts Walkers so should only be used as a last resort.

The combat in The Walking Dead: Saints & Sinners feels great. Braining a Walker and hearing the sound of your blade breaking through its skull is gruesome but pretty satisfying. 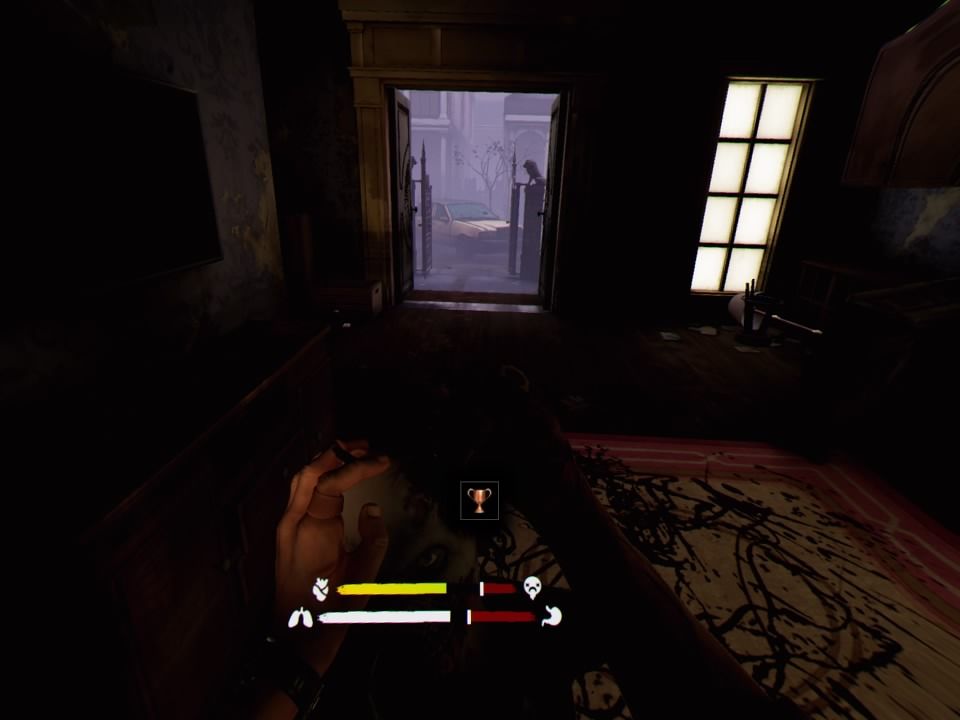 Another way in which The Walking Dead Saints & Sinners is incredible is the atmosphere of the game. Even when walking about in the open during the day, the game is can be very scary. Especially as you know there could be danger around every corner. But when you go inside a dark building the fear factor is turned up to 11. Developers Skydance Interactive has done a fantastic job of making Saints & Sinners really, really scary and intense. 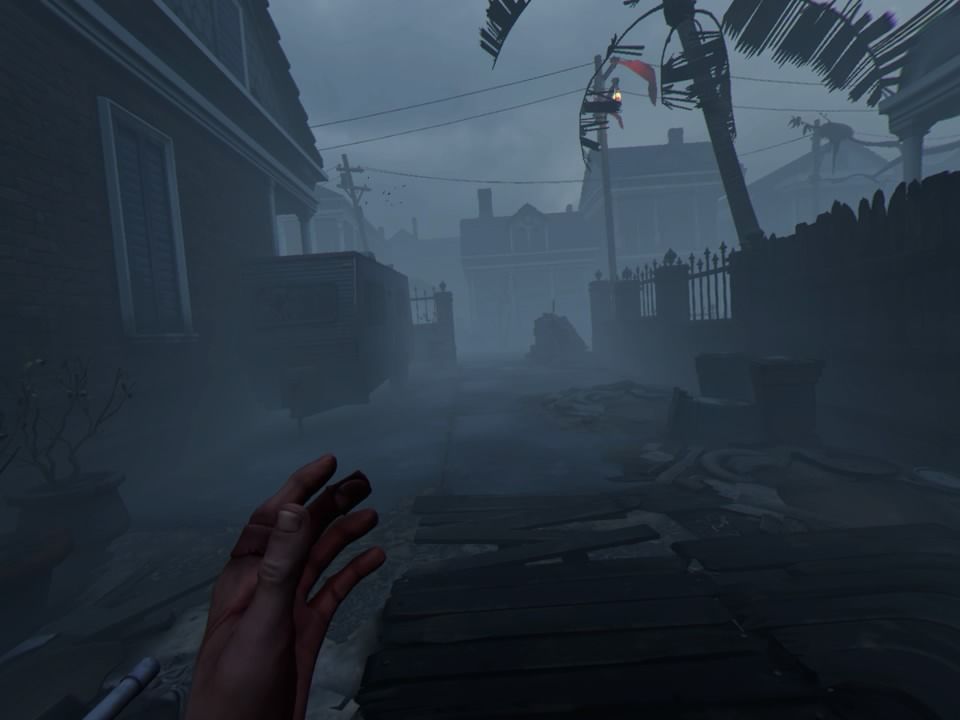 One of the best PS VR games I have played

The Walking Dead: Saints & Sinners was a thoroughly enjoyable VR game from start to finish. As soon as I got used to the mechanics and figured out the best way to survive, the game was just an absolute joy.

From battling with Walkers living enemies to scavenging and surviving, Saints & Sinners provides one of the best PlayStation VR experiences of the past couple of years.

The Walking Dead: Saints & Sinners was a thoroughly enjoyable VR game from start to finish. As soon as I got used to the mechanics and figured out the best way to survive, the game was just an absolute joy.