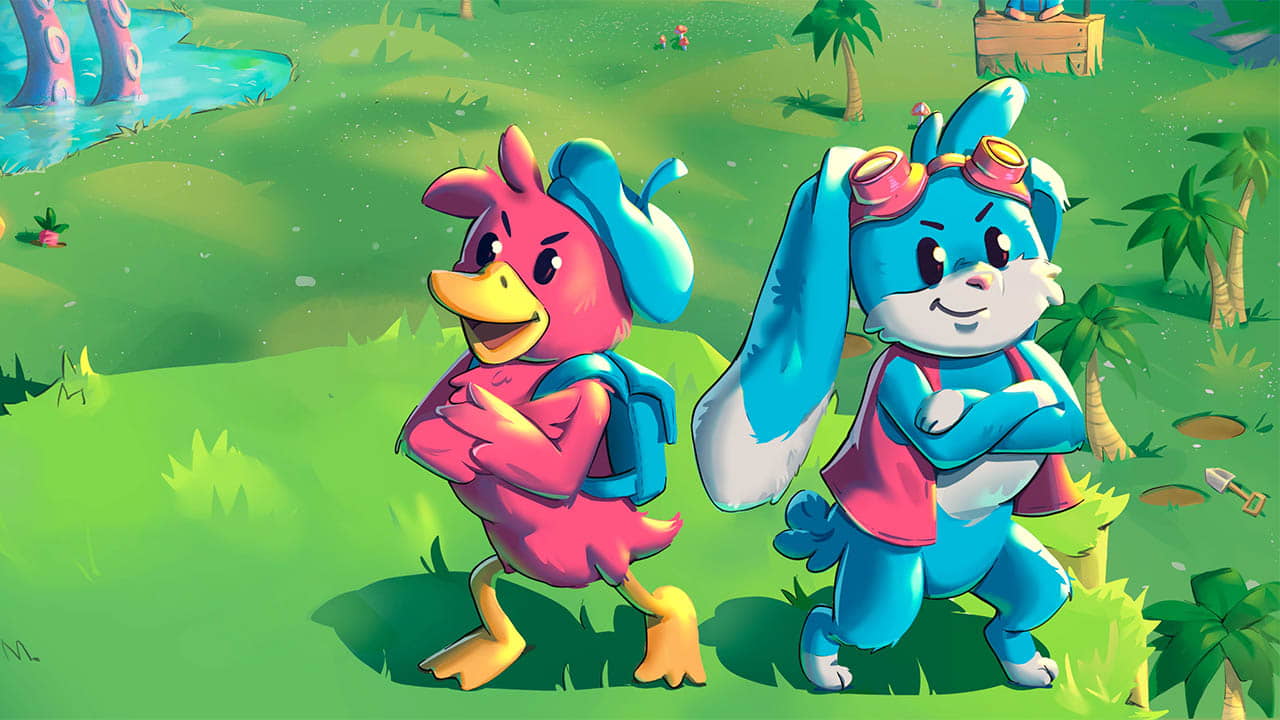 Indie game publisher and purveyor of easy Platinum Trophy games Ratalaika Games has announced another fun game. Dandy & Randy DX will launch this Friday, April 29th for PlayStation 4 and PlayStation 5. Like most Ratalaika published games, this will surely have a straightforward trophy list.

Dandy & Randy DX is a top-down puzzler that has been described as “simply fun” and “a cutesy action-adventure.” The game, featuring two crazy characters; Dandy Duck and Randy the Bunny is developed by Brazillian game maker Asteristic Game Studio.

Check out the short teaser trailer below.

A tale of two Archeologists on the brink of bankruptcy

It seems that our delectable duo, Dandy the pink Duck and Randy the blue Rabbit are a bit short of cash. In fact, they owe a ton of money to a bank. The Duck and Rabbit team and on the brink of bankruptcy. They will probably lose their house, and their cars and will have to eat Tesco’s Value range for the rest of their lives.

But our archaeologist pair get an opportunity, in the form of a promotional flyer promising untold riches in a faraway land. They have no other option but to check it out!

The treasure-hunting duo of Dandy & Randy head off to the faraway land, which happens to be an island. In search of riches and the solution to their debt problems, Dandy & Randy will encounter some baddies. These baddies are part of a pirate gang, who are wreaking havoc on the island. Otto the Octopus is one such enemy and also the first boss in the game. There’s also Bruno the Bear, another member of the pirate gang. And of course, there is Natalia NoGood, the baddest pirate of them all and boss of the NoGood pirate gang.

There will be plenty of equipment to pick up to help Dandy & Randy defeat the pirates and find the riches that they crave. Players will be able to pick up things like a boomerang, which can be used to stun enemies and pick up coins and health packs from afar. There are also hammers to be had, a hammer will allow players to break stones thus finding more money and opening up new paths. Did I mention there is also a thing called Hookshot? With a Hookshot players can easily get across dangerous swamp areas. Oh, and you can also find running shows. These will make players run faster, helping them get out of dangerous situations or solve quick puzzles where speed is key.

Friday, April 29th is the day that you will be able to help Dandy and Randy with their financial problems. Help them find the riches to need to stop the bank from making them bankrupt.

Dandy & Randy DX will be out on PS4 and PS5. As I mentioned previously, it will likely have a simple trophy list and a fairly quick and easy platinum trophy. As with previous Ratalaika Games games, there might also be a separate PS4 and PS5 version, meaning double platinum trophies for you.

Check out the games PlayStation Store page and make a note of April 29th in your diary.