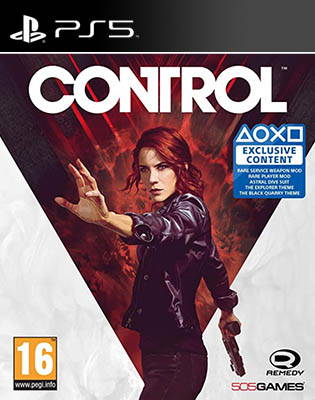 Control is an action-adventure video game developed by Remedy Entertainment and published by 505 Games. Control was originally released on 27 August 2019 for PlayStation 4.

The game revolves around the Federal Bureau of Control (FBC), a secret U.S. government agency tasked with containing and studying phenomena that violate the laws of reality. As Jesse Faden, the Bureau’s new Director, the player explores the Oldest House – the FBC’s paranormal headquarters – and utilize powerful abilities in order to defeat a deadly enemy known as the Hiss, which has invaded and corrupted reality.

The player gains abilities by finding Objects of Power, mundane objects like a rotary phone or a floppy disc imbued with energies from another dimension, that have been at the centre of major paranormal events and since recovered by the FBC.

Control for PS5 was announced by the games developers, Remedy Entertainment in a Tweet on 11th June 2020. The day of the PS5 reveals event.

We’re glad to be able to share that @ControlRemedy will be coming to PlayStation 5 and Xbox Series X. More details coming at a later date. #PlayStation5 #XboxSeriesX

No other information about Control PS5 is known yet, but the PS5 version will likely have graphical and performance improvements that take advantage of the PS5’s CPU, GPU and SSD. A release date for the PS5 version of Control has not yet been announced.