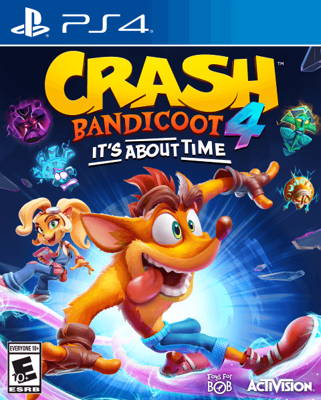 Crash Bandicoot 4: It’s About Time is an upcoming platforming game for PlayStation 4. The game is published by Activision and developed by Toys for Bob.

Bandicoots get ready fur it, Crash is moving 4-ward into 2020 with a brand-new game – Crash Bandicoot 4: It’s About Time. No, literally! Capturing the spirit of the series that fans know and love, everyone’s favourite marsupials are back and putting a fresh spin, jump and wump on conflicts of cosmic proportions, discovering expansive new worlds, unexpected allies, larger-than-life boss battles and powerful new Quantum Masks that must be united to restore order to the multiverse.

Crash Bandicoot 4: It’s About Time is set to release on 2ned October 2020 for PlayStation 4.