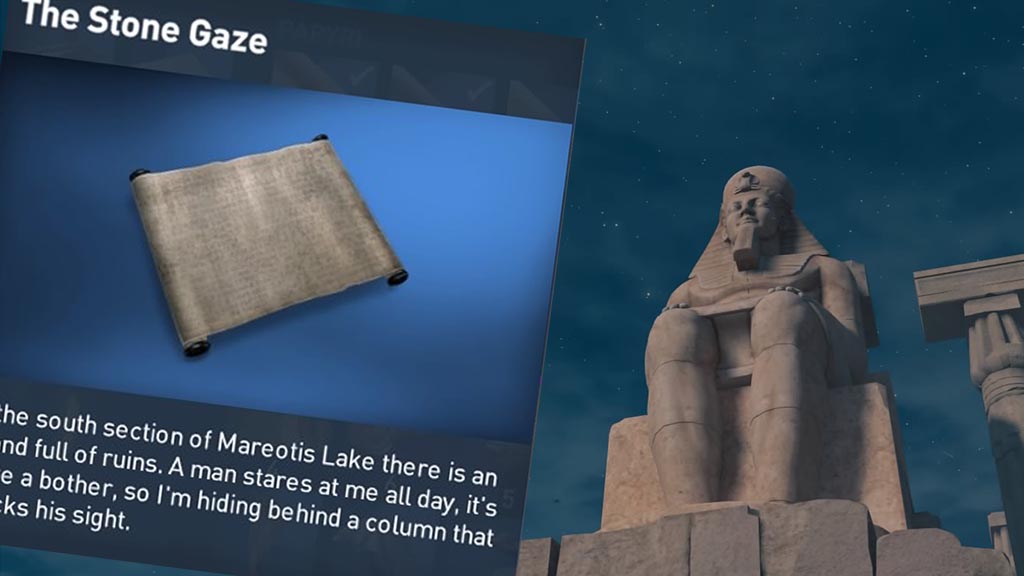 The Stone Gaze is just one a few of the Papyrus Puzzles that you can find in Alexandria. This one is fairly straight forward and takes you on a nice wee boat ride down the Mareotis Lake.

The Stone Gaze Papyrus can be found int he Serapeion building, which is just south-west in the main Alexandria city. It is a large building and has a fast travel point on top of it so should be easy to spot using the map.

The papyrus can be found on a table in a library area.

The Stone Gaze Papyrus clue reads: “In the south section of Mareotis Lake there is an island full of ruins. A man stares at me all day, it’s quite a bother, so I’m hiding behind a column that blocks his sight.”

The island we need to go to is the southern most island on Mareotis Lake, this island also has a fast travel point on it. grab a boat at the nearest port in Alexandria and head to the southern tip of the island in the above image. Once there disembark and head up towards the ruins.

You should be able to spot a large statue of a man sitting down, this is the man referred to in the cryptic clue. You should see a pillar in front of this statue. The treasure is hiding behind this pillar as per the image above.

I hope you get some awesome loot from solving The Stone Gaze Papyrus Puzzle. Make sure to check out my other Papyrus Puzzle solutions.