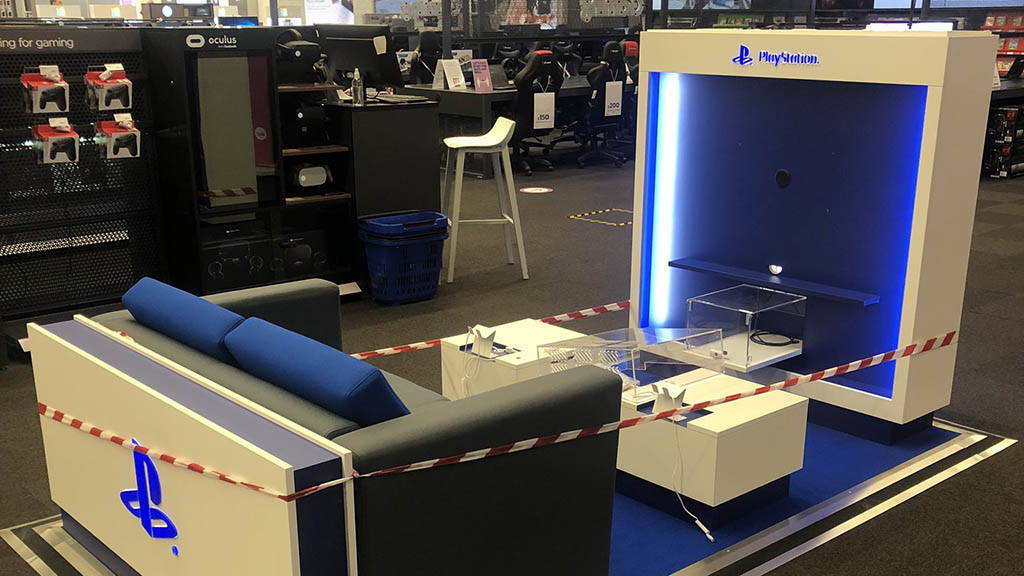 The launch of the PlayStation 5 is a mere few months away. And even though Sony hasn’t released a price or pre-orders for the next-gen console, it looks like they are gearing up for a big marketing push. A recent post on Twitter reveals that some UK retailers are setting up PS5 demo/display areas.

It appears that some UK brick and mortar retailers are starting to set up PlayStation/PS5 themed display and demonstration areas, in preparation for Sony announcing the PS5 price and pre-orders.

Twitter user IRON CORE has spotted one of these display/demo areas being set up in a  UK retail store.

retail stores in the UK are getting #PS5 themed kiosk/area. pic.twitter.com/NzxFa8nXf8

The retail demonstration area, presumably for the PS5, is set-up with a PlayStation branded 2-seater couch. There is also a coffee table in the centre with what clearly looks like two stands/holders for controllers.

There is also a larger display unit with a blue background and lit with blue lights at the side. This is likely where a TV will be situated. You can also see a perspex display case for the PS5 console.

Judging by the background of the image, I would say this photo was taken in a Currys PC World store. Currys PC World is a UK electronics retailer which operates hundreds of large megastores throughout the UK.

With these display/demonstration areas being set-up for the PS5, it is safe to assume that it won’t be long now until we get the final price for the next-gen dream machine.

And once the price for the disc and digital editions of the PS5 is revealed, pre-orders should open up shortly thereafter.